Peanuts Wiki
Register
Don't have an account?
Sign In
Advertisement
in: "Pig-Pen", Boys, Characters introduced in 1954,
and 3 more
English

"Pig-Pen" is a supporting male character in the Peanuts comic strip by Charles M. Schulz. He is best known as the character with a cloud of dirt that constantly surrounds his body and follows him.

"Pig Pen" first appeared on July 13, 1954. In his first appearance, he tells Patty, "I haven't got a name . . . People just call me things . . . Real insulting things." He says he is usually called "Pig-Pen". No real first name or surname for "Pig-Pen" was ever subsequently given in later Peanuts strips.

Being constantly dirty is a trait that "Pig-Pen" is best known for. When he takes a deep breath (to sing, for example), the dust rises briefly around him. He sometimes refers to the cloud that surrounds him with pride as the dust of ancient civilizations. He cannot seem to rid himself of the dust for more than the briefest of periods—indeed, in spite of his best efforts, it appears that he cannot stay clean. He can even get dirty by walking in a rainstorm. In the strip from July 23, 1955, he cleans himself up for a party, but the other Peanuts characters do not let him in because they can't recognize him.

In the strip from November 25, 1959, after bathing and dressing in clean clothes, "Pig-Pen" steps outside his house and instantly becomes dirty and disheveled, whereupon he declares to Charlie Brown, "You know what I am? I'm a dust magnet!" Dirt is similarly shown instantly becoming attracted to a recently cleaned "Pig-Pen" in the episode "The NASA Space Station" from the series This Is America, Charlie Brown. The strip from June 19, 1956 shows "Pig-Pen" trying and failing to wash his hands, after failing to wash them effectively, he realizes that he has "reached a point of no return."

"Pig-Pen's" parents are highly mentioned by him. It rarely appears that they care about their son's filthiness. On July 17, 1954, Charlie Brown tells "Pig-Pen" that his mother wants him home to take a bath. In another strip on June 19, 1956 shows "Pig-Pen" talking to his mother that he has reached the point of no return after failing to wash off the dirt from his hands. On March 8, 1989, after consulting Lucy at her psychiatry booth, "Pig-Pen" claims that his father is named "Pig-Pen Senior".

There have been many jokes about "Pig-Pen's" dirtiness. In one storyline from September 1954, "Pig-Pen" influences Schroeder, Snoopy, Charlie Brown, and eventually Patty, to become messy like him.

"Pig-Pen" is also mocked for being dirty in the TV specials, such as A Charlie Brown Christmas. In It's the Great Pumpkin, Charlie Brown, "Pig-Pen" disguises himself as a ghost, but his true identity is easily revealed because of the trail of dust that follows him.

Charles M. Schulz admitted that he came to regret "Pig-Pen's" popularity, given the character's essentially one-joke nature; he utilized the character very rarely in the later years of the strip's run, and was even gone from September 1967 to March 1976 - a span of about eight-and-a-half years.

"Pig-Pen" last appeared in the Peanuts comic strip on September 8, 1999. That strip is unusual in that it shows him embarrassed to the point of shame by his dirtiness, with none of the pride or sense of destiny that he had expressed in earlier strips.

"Pig-Pen" also appears in The Peanuts Movie. In the scene at the school dance, when the sprinklers go off, he is briefly "cleaned" when water falls on him, prompting Patty (who he is dancing with) to ask "Do I know you?"

Charlie Brown is "Pig-Pen"'s friend, but he initially did not appreciate the cloud of dirt that follows him. He sometimes used to reprove "Pig-Pen" for his constant messiness. He is usually impressed by how "Pig-Pen" manages to stay messy, even in a rainstorm. In one strip, "Pig Pen" is embarrassed when Charlie Brown deduces - simply from the dirt on his clothes - where he has been playing for the past three days.

However, Charlie Brown is the only person to accept "Pig-Pen" for who he is, In one strip he even defended "Pig-Pen"s uncleanliness, by saying, "Don't think of it as dust. Just think of it as the dirt and dust of far-off lands blowing over here and settling on "Pig-Pen!" It staggers the imagination! He may be carrying the soil that was trod upon by Solomon or Nebuchadnezzar or Genghis Khan!"

Lucy treats "Pig-Pen" like a patient, often telling him how to get clean. In March 1989, he consults Lucy at her booth. In one particular comic on April 17, 1994, Lucy tells "Pig-Pen" to go home and get clean. When he does, as Lucy is talking, Pig-Pen quickly becomes dirty once again, much to Lucy's dismay.

Patty and Violet frequently mock and insult "Pig-Pen" for being messy. In one strip, Patty is about to pour a bucket of water on "Pig-Pen", realizing afterwards that he is already clean. Patty turns around, but, as the reader can see, "Pig-Pen" is only half clean and his dirty side is facing away from Patty. In another strip, Violet attempts to shame "Pig-Pen" by making him look in a mirror. She asks him, "Aren't you ashamed?" to which "Pig-Pen" replies, "On the contrary. I didn't think I looked this good." He has also told Violet "I forgot to rake my hair".

In the Peanuts computer game, It's the Big Game, Charlie Brown, "Pig-Pen" says that he is in love with Violet, due to her habit of making mud pies. However, this has never been stated in the comic strip, and therefore cannot be considered canon. It is hinted in September 26, 1954, where "Pig-Pen" cleans himself for Violet, but is rejected by her.

In The Peanuts Movie, Patty is shown with a different opinion on "Pig-Pen", as she is shown with a crush on him and even states, "A little dirt never hurt anyone." Violet, however, has the same opinion of him as in the comics and is disgusted by Patty's crush.

Snoopy, like most of the other characters, is disgusted by "Pig-Pen's" dirtiness. Almost immediately after "Pig-Pen's" intro, Snoopy is revolted when the child pets him and leaves a giant dirt print on his forehead. On one occasion, he is shown running away from a muddy ball thrown by "Pig-Pen". Snoopy even refuses to take food from "Pig-Pen", because the food is too dirty. (Which is considered unusual since Snoopy will stop at nothing to take food from someone.)

TV and film appearances of "Pig-Pen"

As with traditional animation, making Pigpen’s cloud move realistically involved some very creative thinking. Steve Martino, the film’s director, said that the team chose to use Schulz’s own graphic style to create the Pigpen character. The animators realized that since the dirt and dust was always in motion and mirroring Pigpen’s movements, the individual particles making up the dust cloud were really an extension of Pigpen himself.

To bring the concept to life, they created a half-sphere which encircled the character, and split up dust particles’ design into four components which then filled the sphere. As it expanded and contracted with Pigpen’s actions, the cloud moved seamlessly with him.

—Plaque about Pig-Pen at the display from the Charles M. Schulz Museum, 2017

Like most of Schulz's characters, "Pig-Pen" has appeared in many of the animated Peanuts television specials and all five movies beginning in the 1960s. Geoffrey Ornstein first voiced "Pig-Pen" in the 1965 TV special A Charlie Brown Christmas, he also later played the role in A Boy Named Charlie Brown. Various actors have voiced him since.

A song about the character, "Pigpen Hoedown" is featured in the 1984 TV special It's Flashbeagle, Charlie Brown.

The TV specials and films in which "Pig-Pen" appears are as follows: 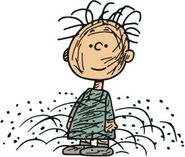 "They'll never guest it's me under here."