Released on VHS and Betamax in 1983. Available on VHS, Betamax, CED VideoDisc, LaserDisc, DVD and VideoNow. Released on Blu-ray on September 6, 2016

A Boy Named Charlie Brown is a 1969 Academy Award-nominated animated film produced by Cinema Center Films and released by National General Pictures. It was the first of five theatrical features based on the Peanuts comic strip. Some of the footage was previewed in Charlie Brown and Charles Schulz. It was released to theaters on December 4, 1969, making it the only and last Peanuts movie of the 1960s.

The film was critically acclaimed and was a box office success, grossing $12 million worldwide.

Charlie Brown's first Little League baseball game of the season approaches, and he eagerly goes to the stadium. Charlie Brown's friends Lucy, Schroeder, Patty, Frieda, Shermy, "Pig-Pen", Linus, Violet and his sister Sally arrive. The game starts, and the team fails the first game of the summer season. Everyone lets out a scream. Charlie Brown walks home, musing that they always lose the first and last games of the season; and all the ones in between. Later on that day, Linus shows up at the front porch of the house and tries to cheer Charlie Brown up, stating that people learn more from losing than from winning.

The next day, Charlie Brown stops by Lucy's psychiatry booth. Lucy tells Charlie Brown that she can help him point out his faults better than anyone else (this session includes a classic football gag). At her house, Lucy reveals a slide projector and a screen, onto which slides showing Charlie Brown's myriad faults will be displayed. However, the 'evidence' does not help Charlie Brown at all, and makes him feel even more miserable.

On the way to school the next day, Linus encounters Charlie Brown, who tells him about the slide show that Lucy showed. As they near the playground, Lucy jokingly comes up to Charlie Brown, and explains that the school is having a spelling bee, and laughs at the thought of him volunteering.

Linus, however, thinks that entering the spelling bee is a good idea. His opinion is met by more laughter and insults by Lucy, Patty, and Violet as they sing the song "Failure Face", which sets Charlie Brown's mind to volunteer. Later in class, Charlie Brown nervously volunteers, and manages to beat the other children in the class.

Later on, at Charlie Brown's house, Lucy proclaims that Charlie Brown (with his newfound fame) should have an agent, a job which she would naturally do best. The others recommend that Charlie Brown should start studying again, which confuses him, given that he just won the spelling bee. The others tell him it was just the beginning. Violet tells him his victory in the school spelling bee has given him the privilege to take part in the Scripps Howard National Spelling Bee.

Charlie Brown's feelings about his victory immediately turn, as he finds his feelings about his bad luck once again eating away at him. Soon afterwards, Charlie Brown boards the bus for the trip to New York City. Linus wishes him luck, but then generously, albeit reluctantly, hands Charlie Brown his blanket for good luck. The children cheer Charlie on as the bus pulls away, but Charlie's fears about living up to their expectations begin to surface again as he makes his way to the Big Apple and checks into his hotel. Back at home, Lucy is seen speaking to Schroeder, which of course ends in his frustration. To regain his composure, he plays the second movement of Beethoven's Pathetique Sonata in C minor (Op.13) while daydreaming of imagery from Beethoven's time.

When Lucy returns home, she finds Linus suffering terribly from withdrawal after giving his blanket to Charlie Brown. Finally unable to take it anymore, he pleads with Snoopy to help him go to New York to find Charlie Brown and get his blanket back. Soon afterwards, an exhausted Charlie Brown opens on his door and is greeted by the enthusiastic Snoopy. Linus, however, passes out. As he comes back to consciousness, he explains to Charlie Brown that he is dying without his blanket.

Charlie Brown tells him he has been studying so hard, he forgot about the blanket, and he is not sure where it could be. After some thought, he guesses that he left it at the New York Public Library. Linus and Snoopy then take off through the streets of New York in the dark night. As they continue walking, Snoopy gets distracted, and ends up ice-skating at the Rockefeller Center ice rink. Soon, he catches up to Linus at the library, Linus, after peering through the front doors of the closed structure, is convinced it his blanket is not there. Angrily, he storms back to Charlie Brown's hotel room to tell him.

Back at the hotel, as Linus continues to suffer from withdrawal, Charlie Brown dresses for the contest. As Charlie Brown shines his shoes, Linus stares in shock: the cloth he is using is Linus' blanket! Linus dives for it, ecstatic to have it back. The three then set off for the spelling bee.

Charlie Brown goes backstage while Linus and Snoopy take their seats in the auditorium where the spelling bee is to be held. Back at home, the rest of the gang are tuning in to the spelling bee, which is being broadcast on television. The contestants stand up and they spell words correctly but one girl gets eliminated for spelling "Irritable" as "I-R-R-I-T-I-B-L-E". One by one, the other contestants are eliminated. A boy is eliminated when he misspells "tyranny" as "T-Y-R-R-A-N-Y." Another boy misspells "indispensable" as "I-N-D-I-S-P-E-N-S-I-B-L-E" and is disqualified. The boy with orange hair misspells "irresistible" as "I-R-R-E-S-I-S-T-A-B-L-E." Then he is off. The girl with black hair and a red shirt misspells "repetition" as "R-E-P-E-T-I-O-N." The girl with pigtails misspells "ingenious" as "I-N-G-E-N-U-O-U-S." Another girl is disqualified when she misspells "irremediable" as "I-R-R-I-M-È-I-D-A-B-L-È." Eventually, the only remaining contestants are Charlie Brown and one other boy resembling Schroeder.

After a long, tense duel between the two, Charlie Brown seems to be spelling at his very best and on the verge of victory. Sadly, though, Charlie Brown is then eliminated for misspelling, of all words, "beagle" as "B-E-A-G-E-L." Everyone (Lucy, Sally, "Pig-Pen", Violet, Frieda, Patty and Schroeder, then Snoopy and Linus, then Charlie Brown) lets out a huge scream "AAUGH!!"; besides it being a relatively simple word, Snoopy is himself a beagle. An irate Lucy turns off the TV and screams to everyone that, "Owning 10% of Charlie Brown is 10% of nothing!". She then turns the TV back on and she angrily says "Charlie Brown...you...you make me mad!". Then she turns it off. A heartbroken Charlie Brown returns home along with Linus and Snoopy. When they get home at nighttime, no one is there to greet them.

The next day, Linus goes to Charlie Brown's house, where he meets Sally. She tells him that her brother has been in his room all day with the shades down. As Linus knocks on the door, Charlie Brown asks who it is. When Linus asks if he can come in, Charlie Brown replies morosely, "I don't care." Linus comes in and sees Charlie Brown lying in bed.

When Linus mentions that the other children missed him at school, Charlie Brown replies that he is not going back to school again. Linus also questions why Charlie Brown also missed a baseball game, which, ironically, was the first game they had won all season. However, as Linus turns to go, he looks back at Charlie Brown. Although he acknowledges that Charlie Brown feels that he let everyone down by losing the spelling bee, he adds, "But did you notice something, Charlie Brown? The world didn't come to an end."

As Linus shuts the door, Charlie Brown thinks for a moment, gets dressed, and then goes outside where the other children are still playing marbles, jumping rope, and Lucy holding a football for him to kick, but she pulls away. She says "Welcome home, Charlie Brown." Just as Linus said, he still has his whole life ahead of him to prove he is a winner.

Peppermint Patty is shown with a sign saying 'Chuck', and is one of the people who cheer for Charlie Brown when he wins the school spelling bee, but she is not heard. 5 also appears, but is also silent.

﻿A Boy Named Charlie Brown also included several original songs, some of which boasted vocals for the first time: "Failure Face", "I Before E Except After C" and "Champion Charlie Brown".

The instrumental tracks interspersed throughout the movie were composed by Vince Guaraldi and arranged by John Scott Trotter (who also wrote "I Before E Except After C"). The music consisted mostly of uptempo jazz tunes that had been heard since some of the earliest Peanuts television specials aired back in 1965; however, for A Boy Named Charlie Brown, they were given a more "theatrical" treatment, with lusher string and horn-filled arrangements. Instrumental tracks are re-arranged and used in the film included "Skating" (first heard in A Charlie Brown Christmas) and "Baseball Theme" (first heard in Charlie Brown's All-Stars). Guaraldi and Trotter were nominated for an Academy Award for Best Original Score for their work on A Boy Named Charlie Brown.

The segment during the "Skating" sequence was choreographed by American figure skater Skippy Baxter. A segment during the middle of the film, in which Schroeder plays Beethoven's Sonata Pathétique, had piano performed by Ingolf Dahl.

The film also features a Jew's harp, which Snoopy plays to help Charlie with his spelling.

A soundtrack album with dialogue from the film was released on the Columbia Masterworks label in 1970. The first all-music version of the soundtrack was released on CD by Kritzerland Records as a limited issue of 1,000 copies in 2017.

Paramount Pictures and CBS both own the film today, as they are the former owners of the Peanuts library. CBS/Fox Video released the film on VHS and Betamax for the first time in July 1983, at an affordable price of only $29.95. The movie was released on DVD for the first time on March 28, 2006 by Paramount Home Entertainment, along with its sequel, Snoopy, Come Home. A Peanuts Double Feature DVD box set containing both films was released on March 15, 2011. A Boy Named Charlie Brown was released on Blu-ray with its sequel on September 6, 2016.

For its Betamax and VHS debut in July 1983, the film was accompanied with a promotional campaign by fast-food restaurant McDonald's, which sold a series of five "Camp Snoopy" glasses with their Happy Meals to promote the home media debut of the film. 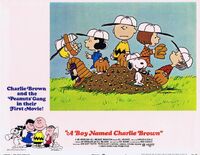 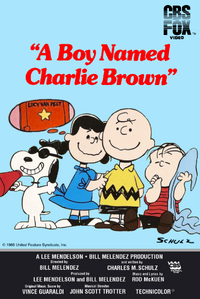 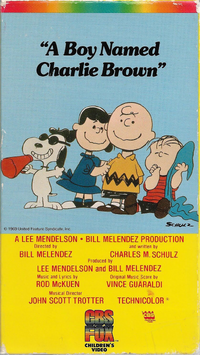 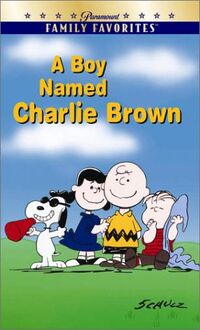 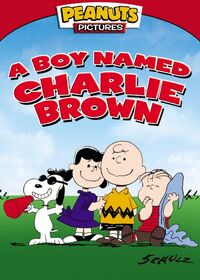 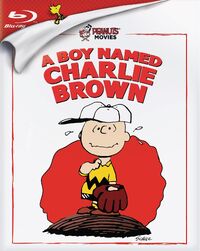 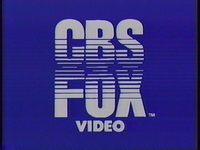 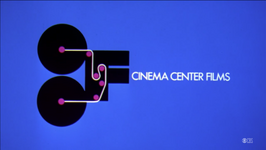 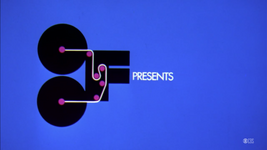 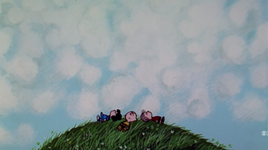 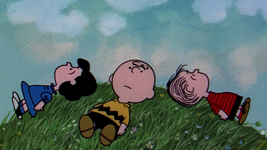 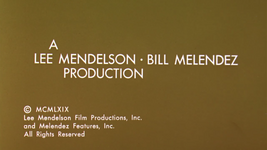 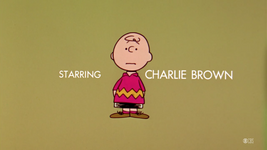 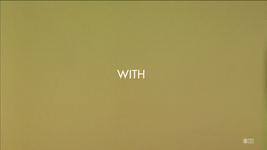 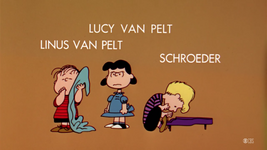 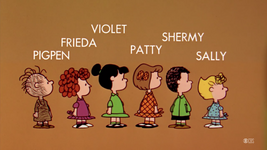 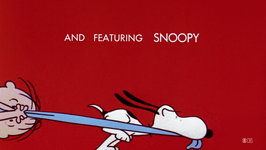 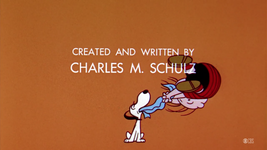 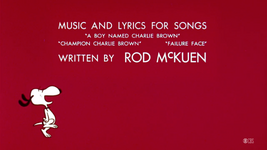 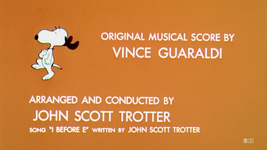 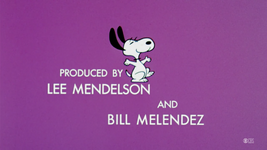 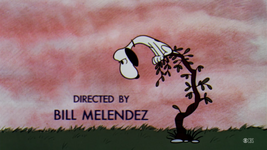 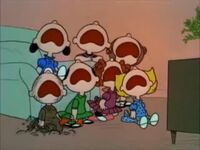 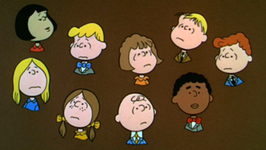 Charlie Brown and the other kids at the spelling bee 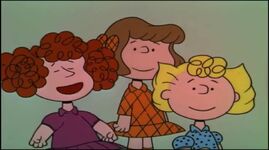 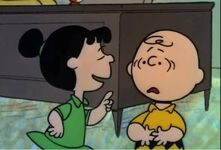