It's a Mystery, Charlie Brown

Charlie and Sally Brown are planning to go to their Grandmother's for Thanksgiving dinner, when Peppermint Patty calls Charlie Brown, and invites herself to have Thanksgiving dinner at his house. Shortly thereafter, she calls two more times, saying that Marcie and Franklin will also be attending. Charlie Brown tries to explain that this is not possible, but Peppermint Patty keeps prattling on with little regard to Charlie's words.

When Linus comes over, Charlie Brown explains his predicament. Linus then proposes a solution: have two dinners. One can be in the afternoon with the other kids, and then Charlie Brown can still go to his Grandmother's as planned. Charlie Brown is not convinced of this idea, as his culinary expertise is limited to preparing cold cereal and maybe toast. Linus, Snoopy, and Woodstock offer to help Charlie Brown prepare for the dinner.

Linus recruits Snoopy and Woodstock to help set up the guest area, as well as prepare the meal. Sometime later, Peppermint Patty, Marcie and Franklin arrive. After everyone has a seat, Linus says grace and gives a speech in regards to what Thanksgiving is about.

Once grace is finished, Snoopy serves the food that has been prepared: buttered toast, jellybeans, pretzel sticks, and popcorn. Upon seeing the food available, Peppermint Patty grumpily shouts at Charlie Brown regarding its poor quality, saying that they should have been served a real Thanksgiving dinner. Embarrassed at the situation, Charlie leaves the table.

Marcie discusses things with Charlie Brown, who still feels that he has ruined the day for everyone. However, Marcie explains that Thanksgiving is about what Linus said in his speech: it's about being together and being thankful like the Pilgrims were. As they finish talking, Peppermint Patty appears and apologizes in person for her attitude.

As he looks at the clock, Charlie Brown realizes that he is late for dinner with his grandmother. He quickly dials her up, and explains what happened. When his Grandmother finds out that his friends have not eaten dinner yet, she insists they all come to eat at her place.

Shortly thereafter, the kids start on their trip to Charlie Brown's grandmother's condominium, leaving Snoopy and Woodstock alone at home. As soon as they leave, the two friends set up a table outside the doghouse, where Snoopy serves up a traditional Thanksgiving dinner for the two of them. 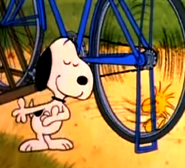 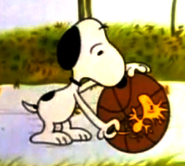 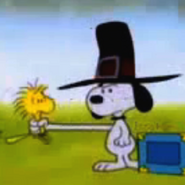 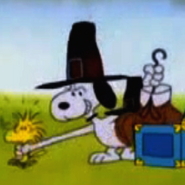 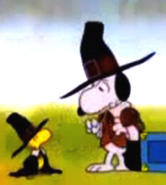 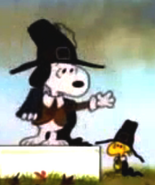 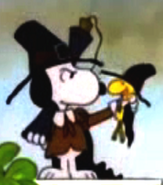 This special is included in the 2001 Peanuts Classic Holiday Collection VHS release.

Ad for "A Charlie Brown Thanksgiving" sponsored by McDonald's