Be My Valentine, Charlie Brown

It's the Easter Beagle, Charlie Brown

You're a Good Sport, Charlie Brown

Linus is fond of his teacher, Miss Othmar. To show his love, he buys her a huge heart-shaped box of chocolates. However, Violet warns him it is probably not smart to fall in love with a teacher. When Linus leaves, Sally believes that he bought the candy for her and decides to make him a valentine in return. Later, Lucy goes to a puppet show held by Snoopy. At the concession stand, Lucy asks for popcorn. However Snoopy cannot understand Lucy and he gives her first candy, then soda, and finally popcorn. With Charlie Brown narrating the show, Snoopy tells a story about true lovers (which ends up being a little too interactive for Lucy's taste).

Valentine's Day then comes and the gang brings valentine cards for everybody. At Birchwood School, Schroeder explains that there is a box labelled "Valentines For Those We Love" with a slot for putting the cards in. Charlie Brown brings a briefcase hoping he will get lots of valentines. However, after the cards are passed out, it turns out Charlie Brown gets nothing except for a candy heart (which reads "Forget It, Kid"). Angry, Charlie Brown throws the valentine box out the classroom window. Linus is also upset as he was unable gave his candy to Miss Othmar (having left with her boyfriend). Sally, who still believes the box of candy is for her, is dismayed when Linus attempts to go after Miss Othmar to give her the candy. Charlie Brown and Linus vent their heartbreak in different ways: Linus throws his chocolates off a bridge, not knowing that Snoopy and Woodstock are under it catching and eating every chocolate he throws off; Charlie Brown kicks his mailbox, only to accidentally hurt his foot in the process. The next day, Violet gives Charlie Brown a used valentine (she took her own name off of it) as an apology, despite Schroeder berating her for dropping by the day after Valentine's Day and acting out of guilt. As Charlie Brown and Linus meet at the brick wall later, Charlie Brown expresses hope that Violet's pity valentine will start a trend and he will get more valentines the following year.

"You'll hate yourself in the world and everybody in it!" - Lucy van Pelt

Sally is ineffectual in Be My Valentine, Charlie Brown, even with her big brother's help. 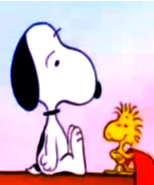