The Brown house is the house where the Brown family lives in the comic strip Peanuts created by Charles M. Schulz. The house is inhabited by Charlie Brown, Sally, Snoopy and Mr. and Mrs. Brown. In the TV specials, the Brown house changes from one special to another, probably because the animators were not able to reuse backgrounds in the animation process.

There have been lots of different houses for Charlie Brown over the years in both comic strips and TV specials, but it is certain that the Brown house has a siding wall. The color is different in different specials. It has sometimes been blue and yellow but the majority of times it has been white.

The house is not very big either, taking into account that Charlie Brown's father is a barber and his mother is a housewife.

The main entrance and back yard has a step with two bushes around it, although in the TV specials You're a Good Man, Charlie Brown and It's Flashbeagle, Charlie Brown it appears to have a front porch with a rocking chair.

The house has got a separate garage. Mr. and Mrs Brown do not keep their cars in it. Instead, they use it to store junk and old items such as mattresses and a ping pong table.

The house also has a large garden where Snoopy's doghouse is located. Snoopy spends most of the time of his day there.

According to the comic strips and TV specials the Brown house is usually shown to have these recurring spots:

The living room is probably the room where the Brown family spend most of the time. The room appears to have a TV set, a large couch and a sofa where Charlie Brown usually reads his books. Sally spends most of her time in there, watching television and lying in her beanbag. In the strip from October 4, 1973, when Peppermint Patty comes to stay for a week with Charlie Brown, she is surprised to see how much time they spent on watching TV. The living room also contains the family telephone where the Brown family get and make calls.

Charlie Brown's room has appeared lots of times in the 'Peanuts' cartoon with also different wall colors like brown and pink, but the majority of times the wall is blue. Charlie Brown (and occasionally Snoopy) sleep here. The room has a big bed with a bed table and a lamp. The wall is full of baseball posters and flags. He also has plane or car models, a piggy bank and the portrait of Snoopy. The room faces east as Charlie metioned in the strip of June 12, 1973 so he could see the sun coming up.

Sally's room has been painted pink in all the TV specials. It has a closet where Sally keeps all her clothes and shoes. In You're Not Elected, Charlie Brown, the room has wallpaper with roses on it. Sally's bed is similar to Charlie Brown's, it could be said that it is the same model. There is also a teddy bear in the room, as seen in a comic strip. 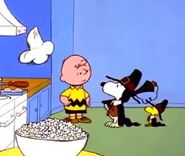