Along with Coca-Cola, Dolly Madison sponsored Charlie Brown's All-Stars and It's the Great Pumpkin, Charlie Brown, but only on their original airings in the 1960s. On further releases of those specials, the Coca-Cola and Dolly Madison branding was edited out.

Dolly Madison used Peanuts characters in its advertising and packaging of certain products during the 1960s, 1970s, and 1980s.

Zinger Zappers were rectangular snack cakes made by Dolly Madison which were filled with creme. They came in devil's food (chocolate), vanilla, and raspberry flavors. The Peanuts commercials starred an alter ego of Snoopy, the Zinger Zapper, who takes Zingers from the other Peanuts characters.

Charlie Brown is at Lucy's psychiatry booth and complains that someone keeps taking his Zingers. Lucy regards him as having an irrational fear and attempts to eat a Zinger. Snoopy quickly takes her zinger before she can take a bite.

Lucy places Zingers on a table lit by a single lamp. The Zingers are placed as bait for the thief who keeps stealing the zingers. Peppermint Patty, Charlie Brown, Linus and herself are suspects. Snoopy is hiding behind them until Lucy turns the light out, when he snatches them and is exposed as the culprit. Charlie Brown incorrectly blames the butler before the commercial comes to a close.

Dolly Madison individual fruit pies featured Peanuts characters on their wrappers until the early 1980s. Each flavor had a different character on the wrapper.

The separate cupcakes sold as Razzys, Koo Koos, and Googles featured Charlie Brown, Linus, and Lucy. Razzys were cream filled white cupcakes with raspberry and coconut covering, and featured Lucy on their wrapper. Koo Koos were chocolate cupcakes with cream filling and chocolate frosting, and featured Charlie Brown on their wrappers. Googles featured Linus on their wrappers. They were white cake cupcakes with vanilla frosting with cake bits and had a cream filled center. Razzys, Koo Koos, and Googles were discontinued. A similar snack called Ding Dongs, which were a replacement for Koos Koos is currently produced by Hostess Snacks, a sub brand which is owned by the same company as Dolly Madison, Hostess Brands. 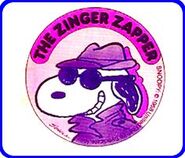 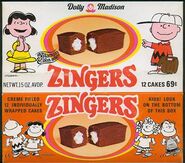 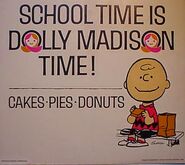 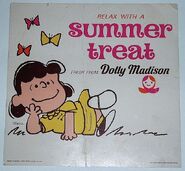 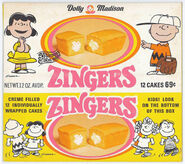 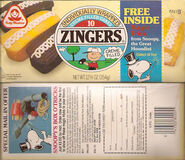 Retrieved from "https://peanuts.fandom.com/wiki/Dolly_Madison?oldid=167929"
Community content is available under CC-BY-SA unless otherwise noted.