View source
watch 01:20
What is the Football Gag?
Do you like this video?
Play Sound 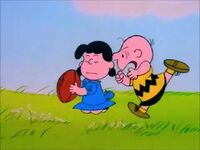 The football gag is a joke that has been featured many times in Charles M. Schulz's comic strip, Peanuts. There have been several variations on the joke over the years. The football gag has also been included in some Peanuts animated television specials.

The characters involved in the gag are Charlie Brown and Lucy van Pelt. Lucy tells Charlie Brown that she will hold a football while he comes running up and kicks it. Charlie Brown usually refuses to kick it at first, not trusting Lucy. Lucy then says something to persuade Charlie Brown to trust her. Charlie Brown runs up to kick the ball, but at the very last second before he can kick it, Lucy removes the ball and Charlie Brown flies into the air, before falling down on his back and hurting himself. The gag usually ends with Lucy pointing out to Charlie Brown that he should not have trusted her.

In the strip from October 18, 1953, Charlie called Lucy van Pelt hopeless and told her that little girls don't belong on football fields, and ordered her home, even failing to tell her the football was hers. This could've lead to this gag of Lucy van Pelt constantly pulling the football away from Charlie for malicious reasons.

The first appearance of the gag is in the strip from November 14, 1951. In that strip Violet, not Lucy, is the one holding the ball and she only pulls it away because she is afraid that Charlie Brown will kick her hand. Lucy was first shown playing the prank on Charlie Brown on November 16, 1952; the concluding part of the comic strip shows Charlie Brown running towards the ball and then tripping over it. Every year afterwards for the remainder of the strip's run, in the early autumn, Lucy would continue to fool the boy, with the exceptions of 1985, and 1990, for unknown reasons. In the October 16, 1983 strip, when she tries to dare him, he already knows what will happen, so he walks away; unfortunately, he sees Sally, Peppermint Patty, Marcie, Snoopy and Woodstock all holding footballs and daring him to kick them.

The prank is sometimes presented in unusual ways. One example is in the strip from October 24, 1999, in which Lucy asks Rerun to play the trick instead. It is not revealed whether or not Rerun does what Lucy asked him to do. In You're in the Super Bowl, Charlie Brown the gag is briefly stopped by Peppermint Patty telling them about a football punt, pass and kick contest. While Lucy is distracted Charlie Brown makes an attempt to kick the ball, but Lucy still manages to pull it away.

Charlie Brown comes close to kicking the football, in a 1979 storyline that begins when he is ill in the hospital. In the strip from July 27, 1979, Lucy promises she will never pull the football away again, if Charlie Brown gets better. She does not realize that the boy will find out about her promise, but when he does, Lucy realizes she has no other choice but to let Charlie Brown kick the football. In the strip from August 2, 1979, Lucy keeps her promise not to pull the ball away that year, but Charlie Brown misses the ball and accidentally kicks her hand. Later, when he apologizes for the accident, the next frame shows her bandaged hand and her angrily telling him that next time he goes to the hospital, he should stay there.

Charlie Brown is depicted as kicking the ball in the special, It's Magic, Charlie Brown, in which he becomes invisible. However, that did not happen in the strip, so was not considered canonical by Schulz.

In a strip from the summer of 1990, when Charlie Brown meets Peggy Jean. She offers to hold the football, but Charlie Brown, being too scared she will do what Lucy does, refuses to kick it. She then gets upset and leaves camp for that. However, when she returns, she does not make him kick the football.

Almost all Peanuts fans agree, the cruelest example of the trick is in the TV special, It's Your First Kiss, Charlie Brown, in which Lucy pulls the football away during an actual game. It is not the fact that Lucy pulls away the football that upsets them, but that Charlie Brown is blamed for missing it when it is clearly not his fault. Even later when he brings her a kicking tee and she tosses it aside and he reminds her of her prank, she again reminds him she would never do such a thing. Many viewers wrote in protesting—while they could accept Lucy pulling the ball away, they could not accept Charlie Brown being senselessly blamed for something he clearly did not do. Schulz and the producers agreed, and some of the lines where Charlie Brown's teammates berate him have since been re-dubbed to make Lucy take the blame in subsequent rebroadcasts. In the DVD release, two lines where Peppermint Patty blames Charlie Brown are re-dubbed to what resembles backwards talk (at about 7½ minutes in, "Boy, Chuck, you really goofed up on that play!"; and at around 15½ minutes in, "Chuck, you can't do anything right!!").

Charles M. Schulz noted that, after he drew the final Peanuts strip, he realized to his sadness that Charlie Brown would never get to kick the football, although he also stated that having him actually succeed would be a disservice to the character.

In The Schulz Museum, there is one exhibit, of a mural composed of 3,588 Peanuts comic strips that, when they are all put together, form a picture of Lucy holding a football while Charlie Brown is trying to run up and kick it.

List of strips in which the football gag is pulled

List of appearances of the football gag in animation