View source
watch 01:33
Who is Frieda?
Do you like this video?
Play Sound

“One day, while searching for some kind of new story to work on, I decided to have the character named Frieda... threaten Snoopy with bringing a cat into the neighborhood.”

Frieda is a supporting female character in the Peanuts comic strip by Charles M. Schulz, earning her name from Schulz's longtime friend, Frieda Rich. She was the eleventh permanent character to join the Peanuts gang and was prominently featured in the early years of the strip.

She was a regular in Peanuts throughout the 1960s but, as newer characters were phased in towards the end of the decade, she began appearing less often. She ceased to be a featured character after 1985, making only cameo appearances since then in various television specials. Today she is best remembered as the Peanuts character with naturally curly hair, of which she is extremely proud.

Frieda, while she is a protagonist, does have some bad tendencies. Frieda's biggest flaw is how vain she is, which often distracts her. Frieda is nicer in the strip, never putting down anyone unless that person really deserves it. She is willing to help her friends if it is necessary as well.

Unlike in the strip, Frieda is depicted as a bit meaner to Charlie Brown (especially in Charlie Brown's All-Stars, where she and the other, kids incorrectly assumed that Charlie Brown lost their team the game on purpose and got angry over his failure even though logically his attempt for a home run should be a success given real-world physics and helping your teammate is better even if a loss is their fault).

Frieda was first introduced to Charlie Brown by Linus on March 6, 1961. She served as a major part of the comic strip for a brief period of time and appeared in the TV specials. Her first television appearance was in A Charlie Brown Christmas in 1965.

Although blessed with one of the strip's most immediately memorable debuts, Frieda's place as a regular among her neighborhood friends was one of the shortest at a mere 15 years. Her relatively brief tenure was partly due to a one-joke physical characteristic: her "naturally curly hair".

In her early appearances in the strip, Frieda is presented as a chatterbox. She sits behind Linus in class, but due to her constant talking, Linus claimed not to have heard a word that their teacher has said all year.

Frieda is very proud of her "naturally curly hair". She manages to bring up the topic of her hair in every conversation, which is shown to annoy the people around her. This self-love about her hair leads people to believe that she is rather vain. In turn, Frieda believes the other girls are jealous of her hair and becomes disappointed when a girl says otherwise. Frieda also believes people expect more from her because she has naturally curly hair. Nevertheless, enough people in the neighborhood like her that she got thirty valentines one year. She has also admitted that she used to be an avid reader until she started getting too busy.

Frieda Rich, a Minnesota artist whom Schulz knew and the character's namesake,[1] was once asked whether she bore any character resemblances to her cartoon counterpart. She replied, "I recognize myself," adding as an example that while talking to Schulz once about Universalists and Congregationalists, she had jokingly called herself a "conversationalist," and Schulz borrowed that for the strip. Faron was named after country singer Faron Young.[2]

As she always says, Frieda has "naturally curly hair", of which she is extremely proud. In her animated appearances, her hair is red. She usually wears a dress, which is colored violet in her animated appearances and has a pleated skirt, and black and white saddle shoes similar to those of Lucy, although on rare occasions (in animated appearances), she is seen wearing black Mary Janes, similar to those of Violet and Patty. In The Peanuts Movie, her dress is colored dark pink, the stripes on her saddles are brown instead of black, and also her hair is bright orange rather than red, probably so the viewers wouldn't think she was Heather.

Unlike Lucy, Patty, and Violet, Frieda is usually a lot nicer to Charlie Brown and seems to be mindful of his feelings. Although she becomes angry with Charlie Brown on a few occasions, she never teases him or puts him down (except for rare moments in the Peanuts television specials). She eventually joins Charlie Brown's baseball team as an outfielder but refuses to wear a baseball cap because it would hide her naturally curly hair, though she does make rare exceptions, such as the April 18, 1965 Sunday strip.

She seems to be one of the few characters in the neighborhood that Charlie Brown feels confident enough to stand up to. In one strip, Frieda is badgering Snoopy about chasing rabbits and Charlie Brown simply tells her to mind her own business.

Linus was the first character in the comic strip who Frieda met. She is also his classmate and sits behind him in class. From the start of Frieda's appearance in the strip, Linus is seen taking her around the neighborhood and introducing her to the other kids. Not much is shown of their friendship beyond those strips that introduce her, but even early in their relationship, they seemed to look out for each other. In one strip, when Frieda unintentionally hurts Lucy, Linus begs his sister not to slug her. Frieda is one of the few characters who does not see Linus' need for a security blanket as a bad thing, for which he is so grateful that he kisses her hand.

Out of all the characters in the strip, Frieda has the most trouble getting along with Snoopy, to whom she frequently accuses of being "lazy" and "useless." She has strong preconceived notions of what a beagle should be doing with its time; she insists that Snoopy become a working dog and a hunter (especially a hunter of rabbits), instead of spending so much time sleeping on top of his doghouse. She often comes over and tries to goad Snoopy into chasing rabbits with her, either by threat or persuasion. Snoopy is always reluctant to take up Frieda's suggestion. If he does consent to hunt, he will either "sandbag it" and only pretend to look for the rabbits, or if he does find rabbits, he will instead frolic and play with them once he is out of Frieda's sight. In one strip, Frieda reports Snoopy's behavior to the "Head Beagle" in a fit of frustration, which leads to him being found guilty of not meeting his rabbit quota. The other children in the neighborhood get angry at Frieda for turning him in. Frieda even buys a cat (Faron) as a way of motivating Snoopy to get over his laziness, although Faron turns out to be even lazier.

In the Sunday strip from January 18, 1970, Frieda makes Lucy jealous by leaning on Schroeder's piano. Schroeder seems to dislike her as much as he does Lucy since she also does not know who Beethoven was (even though Frieda claims that she is hanging around Schroeder because she is a music lover). In the Sunday strip from March 22, 1970, Frieda comments to Lucy that Schroeder is not very friendly. When Frieda is about to kiss Schroeder during his piano playing, she is surprised to find that she has instead kissed Snoopy on the lips. On another occasion, Lucy (with encouragement from Snoopy) actually gets into a physical altercation with Frieda.

Almost as soon as they are introduced, Frieda's relationship with Lucy had gotten off to a rocky start when she brings up the subject of her naturally curly hair. Lucy becomes visibly offended by this, so much that Linus (upon introducing her to Frieda) feels it necessary to beg Lucy not to slug her. Despite Frieda's faux pas, the two girls eventually became friends and Frieda would often be seen with Lucy's group of female friends, along with Violet and Patty, though she would never be shown being mean to others, not even Charlie Brown, the main victim of the girls' abuse. When they are playing baseball for Charlie Brown's team, they often spend their time in the outfield chatting instead of paying attention to the game.

Although Frieda was a regular character from 1961 to the late 1960s, her appearances gradually began dwindling. According to Charles Schulz, "I realized that Frieda added relatively little to the strip and had few character traits beyond bragging about her hair and her obsession with getting Snoopy to chase rabbits." Her last major impact on a storyline was running throughout October 1969, when she reported Snoopy to the Head Beagle; from here on, her appearances became fewer and further between, sometimes not appearing for years at a time.

Frieda's penultimate speaking role was in the July 26, 1978 strip.

A girl resembling Frieda, with her hair coloured-in black, appeared on the December 2, 1983 strip; whether it is Frieda or not is debatable.

Frieda also continued to make appearances in both the animated Peanuts specials and the Saturday morning series The Charlie Brown and Snoopy Show - even being mentioned in the lyrics of the latter's theme song. She is also featured as an unseen character in the musical You're a Good Man, Charlie Brown, being mentioned several times and being yelled to at one point. Also in this show, her characteristic fondness for hunting rabbits is assumed by Sally. In one particular strip from 1994, Patty is seen asking Snoopy to chase rabbits with her, a role that was previously taken up by Frieda.

Frieda appeared in 150 strips and appeared for the last time on November 22, 1985, with her first appearance in seven years.

Frieda has appeared in various animated specials, starting with A Charlie Brown Christmas in 1965, and is also seen in all five feature films. She continued to have speaking roles in the specials for many years until she eventually sank into the background. She has been surprisingly absent from several specials where her presence would have been appropriate such as Is This Goodbye, Charlie Brown?, Snoopy's Getting Married, Charlie Brown, and Happy New Year, Charlie Brown!.

Unlike in the strip, Frieda is depicted as a bit meaner (especially in Charlie Brown's All-Stars, where she and the other, kids incorrectly assumed that Charlie Brown lost their team the game on purpose and got angry over his failure even though logically his attempt for a home run should be a success given real-world physics and helping your teammate is better even if a loss is their fault). 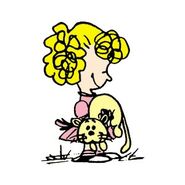 Frieda with her cat Faron. Note the coloring error where she appears blonde? 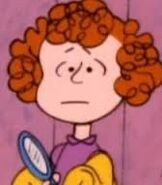 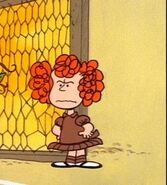 Frieda shows off her dance moves!

Frieda as she appears in The Peanuts Movie.