You're in Love, Charlie Brown

Peanuts Specials Vol. 1 iTunes, He's Your Dog, Charlie Brown Deluxe Edition DVD, Peanuts 1960's Collection DVD, Snoopy Collection: Volume 3 DVD (Region 4: Australia/New Zealand)
He's Your Dog, Charlie Brown is the fifth animated television special based on the Peanuts comic strip by Charles M. Schulz. It was first broadcast on CBS on February 14, 1968. It was the last of the Peanuts specials to feature the majority of the child actors who had put their voices to the first special, A Charlie Brown Christmas, from 1965.

Snoopy has caused a lot of mischief and upset most of the children. They demand that Charlie Brown do something about Snoopy's behavior (mainly because as Snoopy's owner, he takes full responsibility for his actions). Charlie Brown calls the Daisy Hill Puppy Farm asking if they will take Snoopy back to learn some obedience.

It is a long way to the farm, therefore, Charlie Brown asks Peppermint Patty to look after Snoopy for a day. She agrees to have the dog over. But the next day, Snoopy does not go to the farm. On the spur of the moment, he decides to change his mind, packs a suitcase, and starts walking around the neighborhood. Worried that he has been found out already, he still proceeds out of town on his way to the house where Peppermint Patty lives. While there, he relaxes and pretends that he is a soldier on leave in Paris. This angers the girl as he does nothing but lounge by her pool while she serves him root beers and does the dishes.

A week later Charlie Brown receives a phone call from the farm saying that Snoopy never arrived there. He soon discovers that the dog has been staying at Peppermint Patty's all week. He comes by and attaches a leash to Snoopy's collar in order to bring the dog home. Snoopy escapes from Charlie Brown's leash and heads back to Peppermint Patty's house. However, instead of going back to rest and relaxation, the girl forces Snoopy to do all of the household chores as payback for her cleaning up after him.

Later on, the other children start to miss Snoopy. Charlie Brown tries to bring Snoopy back again. However, since he brings the leash again, Snoopy just tears it up and refuses to come back. Later that day, while cleaning dishes, Snoopy ends up being infuriated by all of the chores, and to get rid of his anger he starts breaking the dishes. However, Peppermint Patty comes into the kitchen and immediately banishes Snoopy to the garage in anger as a penalty.

That night Snoopy realizes that he is better off living at Charlie Brown's house. As Peppermint Patty had not locked the garage door, he escapes, gathers all his belongings, and heads home to be reunited with his owner. The next day, all of the children in Charlie Brown's neighborhood rejoice in Snoopy's return.

Roy also appears in this special, but is silent.

Voice actors from the special. 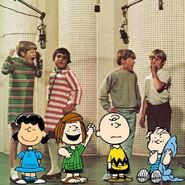 "(Running like the wind, I flee madly across no-man's land!)" 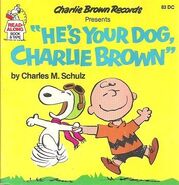