It's the Pied Piper, Charlie Brown is the thirty-ninth animated special based on the Peanuts comic strip by Charles M. Schulz. It was originally released direct to video on September 12, 2000. It was the last Peanuts special to be produced by Charles M. Schulz and the first to be released after Schulz's death.

Sally Brown reminds her brother Charlie Brown that he promised to read her a story. Charlie Brown is reluctant to read to his sister at first. He reminds her that she has broken promises that she made to him, namely promising to feed Snoopy that night and promising not to move her belongings into Charlie Brown's bedroom every time he goes out. However, Sally insists and eventually Charlie Brown agrees, offering her a choice of listening to War and Peace or The Pied Piper. Sally weighs the books and chooses The Pied Piper because it is lighter, and consequently shorter.

Charlie Brown begins reading the story but Sally says that she does not want to hear about rats, although she would not mind hearing about mice. Consequently, Charlie Brown changes the story. He tells his sister that there was once a town very much like their town where people just like them lived. The town was overrun by what Charlie Brown calls "sports mice", mice who like playing sports.

The scene changes to the story that Charlie Brown is telling his sister. Mice are seen on the streets, in people's homes, in parks, in the library and in the mayor's office. The mice play sports, dance and play Schroeder's piano.

Snoopy plays the squeezebox, the mice are put under a spell and follow him out of town. The mayor and his council are delighted that the mice are gone. However, when Charlie Brown and Snoopy come to collect the year's supply of dog food, the mayor claims that he does not remember promising such a generous reward. All of the council members say that they can not remember the mayor making such a promise either. Charlie Brown shows the mayor the contract but the mayor refuses to honor it, saying that it is not a real contract, just a childish scribble. Charlie Brown warns the mayor that those who refuse to pay will pay in other ways.

Snoopy plays his song again. The mayor and his council become bewitched and follow Snoopy out of town, never to return again.

Charlie Brown concludes his story by telling his sister the moral of the tale: "a promise is a promise". Sally grudgingly accepts the moral but insists that nothing like that could happen in real life. The two children then hear music coming from the yard. They look out the window and see Snoopy in the Pied Piper costume playing the concertina while a bewitched Linus, Lucy, Franklin and Peppermint Patty dance around his doghouse. Lucy is able to stop dancing long enough to shout at Charlie Brown, asking him to make his dog stop. 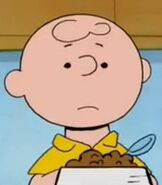 Retrieved from "https://peanuts.fandom.com/wiki/It%27s_the_Pied_Piper,_Charlie_Brown?oldid=188792"
Community content is available under CC-BY-SA unless otherwise noted.