It Was a Short Summer, Charlie Brown is the sixth TV special based upon the Peanuts comic strip, created by Charles M. Schulz. It was directed by Bill Meléndez and originally aired on CBS on September 27, 1969.

It was the first Peanuts special not to feature the majority of the original voice cast from the inaugural A Charlie Brown Christmas, except for Peter Robbins and Sally Dryer.

It was also the first Peanuts special not to receive any Emmy Award nominations.

School is out for the summer and Charlie Brown, Linus van Pelt, Schroeder, and "Pig-Pen" are planning to spend it reading every comic book, watch television, practicing baseball, and classical music. However, Lucy tells them that she signed them up for camp. The girls are eager to go, but the boys hate the idea. (Charlie Brown adds that it's like finding out that he was drafted.) The boys shove each other to get on the bus, while the girls get lined up in order. At camp, Charlie Brown is chosen captain of the boy's camp. The boys and girls have a swim race and the girls win easily. Then they have a softball game, which the boys lose with only one run. Other competitions are just as lopsided.

Afterwards, the boys sit around a campfire and reflect on how miserable they are. In one scene, the colors of the shirts of Schroeder and Linus are mixed up.

Charlie Brown and Shermy, disillusioned by their continued defeat, see Snoopy arm wrestling with some boys. They realize that the boys might get even with an arm wrestling game, with, The "Masked Marvel" (Snoopy) as their champion. Snoopy goes into training, eating the camp's awful food, doing exercises, and drinking a nutritious and noxious concoction. In the contest, Snoopy goes against Lucy. They both get sweaty and tired in the match, which ends when Snoopy kisses Lucy. He pins her hand: but she says that kissing her was a foul, and she is the winner.

Back at school, Charlie Brown only came up with 13 words on his first essay that he and Linus were forced to write on the first day. Linus got an A but Charlie Brown got a C-, Linus then says, "Oh, well, it was a short summer, Charlie Brown", followed by Charlie Brown saying gloomily, "And it looks like it's going to be a long winter".

(All compositions for this special by Guaraldi, unless otherwise specified) 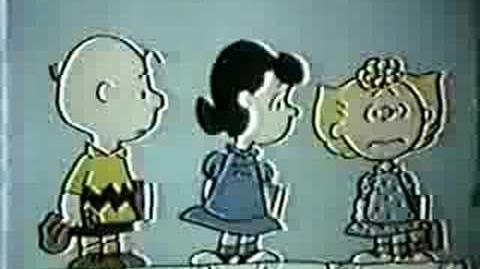 It was a short summer charlie brown-promo