Why, Charlie Brown, Why?

Playing on the swings, spending time with her friends, Linus

Having cancer, being bald, being picked on for her illness

Janice Emmons is a very minor female Peanuts character who never appeared in the comic strip, but was introduced in the TV special Why, Charlie Brown, Why? She is a nice, sweet girl and good friends with Charlie Brown and Sally, but seems to have the closest friendship with Linus. She is voiced by Olivia Burnette.

Janice is a new student at Charlie Brown and Linus' school, and has also befriended them. It's strongly implied that Linus has a crush on her. She likes to play on the school swings. However, after she becomes ill at school one day, she is diagnosed with leukemia, and has to go to the hospital. She loses her hair as a result of the treatment she receives, and has to challenge the teasing of a schoolyard bully (who is told off by Linus), as well as the resentment of her two sisters due to the attention she receives. At the end of the special, she has apparently recovered, her hair growing back longer than before. She has a notably optimistic and brave attitude toward her illness, hoping to eventually recover and return to her normal life, as she says when

she is at the hospital: But I'm going to get well, and go back to school and swing on those swings!.

In addition to her sisters, Janice has an unnamed (and unseen) mother. Her sisters bear a resemblance to Frieda and Patty Swanson from the strip.

Janice has some similarities with the other minor Peanuts character Lila. The two girls look similar and both are hospitalized due to illness at one point, although in Janice's case, her illness is clearly specified.

Janice is a young girl with long blonde hair with a pink bow on top of her head, making her look almost similar to a blonde Peggy Jean. She normally wears a magenta dress, pink socks and gray shoes. In the hospital, she has a blue hospital dress with puffier sleeves, identical to Lucy’s dress but slightly lighter and more like a gown, while the bottom of Lucy’s dress is like a skirt. During her treatment, her hair disappears and because of this, she does not wear her bow, but instead wears a pink baseball cap over her head. At the end of her chemotherapy, Janice's hair grows back even longer, and wears her pink bow again. Her hair slightly resembles Lila's, and her color scheme is similar to that of Mimi from It Was My Best Birthday Ever, Charlie Brown.

In the book adaptation of the TV special, her appearance is slightly different. While she retains her long blonde hair, she is shown wearing a light blue bow attached to a headband on her head, a matching light blue top, white and blue pleated skirt, blue socks and white shoes.

Linus and Janice are both very close friends enjoy each other's company; Linus enjoys pushing her on the swings during recess and spending time with her. He is deeply heartbroken when she's diagnosed with leukemia and does whatever he can to support her. When a bully starts picking on Janice for losing her hair, Linus defends her by furiously telling the bully off and asking him how would he like it if he'd gone through what Janice had gone through with her chemotherapy. When Linus goes to her house to give her a present for Christmas, her older sister complains about her getting more attention due to her cancer, Linus asks her if she doesn't really mean it, and the sister says she doesn't because she and her little sister feel left out due to Janice getting sick. When Janice returns to school, Linus is more than happy to see her again. When they get to school, Linus pushes her on the swing and to his surprise and happiness, Janice has grown her hair back. He and Janice both rejoice as Janice happily plays on the swings.

Linus has a rather obvious crush on Janice, as he and Janice share a hug when he and Charlie Brown visit her in the hospital. In various cover art for the book and VHS tape, Linus is depicted of giving Janice a bouquet of flowers.

Sally and Janice don't interact that much since Sally is too busy complaining about her personal problems, such as waiting for the school bus. When Janice is absent from school, Sally complains why everyone's talking about Janice when she's going to have a bad day at school. When Janice returns back to school, Sally asks her why would she go back to school when she could've stayed home and play, to which Janice responds how it's more fun to be with her friends and that she wants to be at school. It's possible that Sally is aware of Linus's crush on Janice and is jealous with how he spends so much time with her. Despite their issues, Sally is shown to be smiling at Janice when she grows her hair back, showing that she does indeed care for her as a friend.

Like with his younger sister, even though the two don't interact as much, they're still good friends. Like Linus, he is shocked to hear about Janice's cancer diagnosis. Once Janice was done explaining, he asks her if she's going to die, to which Linus scolds him for asking such a scary question, causing Charlie Brown to blush with embarrassment. When Janice returns back to school, Charlie Brown is happy to see her back and is shown smiling by the swing bars when she gets her long hair back. 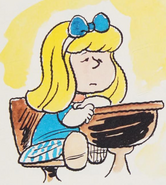 Janice as she appears in the book adaptation of "Why Charlie Brown, Why?"

Janice, as she appears on the VHS cover of "Why, Charlie Brown, Why?" 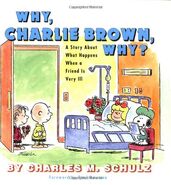 Janice, as she appears on the cover of the book "Why, Charlie Brown, Why?"

Janice, in the advertisement for "Why, Charlie Brown, Why?"

Linus asking Janice if she had fun on the swings

Janice cries as a bully removes her cap, revealing her bald head from chemotherapy, infuriating Linus

Linus welcoming Janice back from the hospital

Linus getting ready to push Janice on the swings

Janice laughs happily on the swings as everyone looks on smiling