Joe Cool is one of Snoopy's alter-egos, which first appeared in the Peanuts comic strip from May 27, 1971.

As Joe Cool, Snoopy pretends to be a college student. To become Joe Cool, the beagle simply puts on a pair of sunglasses, leans against a wall, and says his name is Joe Cool. As the name suggests, Joe Cool believes he is really cool, somewhat like James Dean or Fonzie from Happy Days.

In the strip from May 12, 1972 (later adapted as part of the episode "Lucy vs. the World" from The Charlie Brown and Snoopy Show), after his sister Lucy has thrown him out of their home, Linus moves into Joe Cool's "dorm room", which is in reality Snoopy's doghouse. 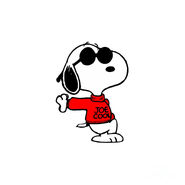