Being with Snoopy, chocolate, playing games

Lila is a very minor female character in the Peanuts comic strip by Charles M. Schulz. Snoopy was once her pet and spent some of his early days in her house, until she was forced to return Snoopy to the Daisy Hill Puppy Farm by the landlord.

The name "Lila" first appears in the strip from February 17, 1968 in which Charlie Brown points out to Snoopy that, although he received valentines from many different girls, he did not get one from Lila. Snoopy briefly becomes upset, believing that his former owner does not love him anymore. The character would be referred to again in a series of comic strips which ran between June 3 and June 8, 1968. At the beginning of the series of strips, Snoopy receives a letter from Lila in which she says that she is coming to visit. Snoopy cannot bear the emotional pain of seeing Lila again and hides in his doghouse until she has gone.

The character made her first (and only) appearance in the strip on August 24, 1968, as part of a series of strips which originally ran between August 20 and August 31 of that year. The storyline begins with Snoopy receiving another letter from Lila, which he is at first reluctant even to open. When Snoopy finally opens the letter, he discovers that Lila is in the hospital and goes to see her. Charlie Brown, who has no idea who Lila is, finds Snoopy's behavior very confusing. Linus tells his friend that he has done some research and has found out who the girl is. In the strip from August 30, 1968, Linus reveals that Lila was Snoopy's original owner, having bought the young beagle at the Daisy Hill Puppy Farm. Lila loved Snoopy very much but her family, who lived in an apartment building, decided that they could not keep him. Snoopy was returned to the Daisy Hill Puppy Farm and was subsequently bought by Charlie Brown.

Lila appears in the second Peanuts movie, Snoopy, Come Home (1972), which itself was an adaptation of the above-mentioned storyline, and in the TV special Snoopy's Reunion (1991). She was voiced by Johanna Baer in 1972 and Megan Parlen in 1991.

Thirty years after her last appearance, she appears in the TV special Snoopy Presents: It's the Small Things, Charlie Brown, retaining her appearance from the comic strip.

Lila's personality is largely unknown as she does not appear much. However, she and Snoopy are known to have had a great time during his days as one of Lila's pets. She was devastated when the landlord told her to remove Snoopy. She never forgets the fun that she and Snoopy during his time as her pet and best friend even after their separation. Even after she buys a cat, Lila still misses Snoopy very much.

Lila has long blond hair that reaches down a little past her shoulders and an pointed nose. She has a purple headband with a bow-tie on top. Her garment is unknown in the strip, but she could be wearing a long-sleeved shirt and pants (Or a long-sleeved dress-shirt). However, in the animated specials, her appearance is very different.

In Snoopy's flashbacks in Snoopy's Reunion, her appearance is slightly different; her hair appears to be much longer and her headband was replaced by a green bow on top. She wears a green dress with a frilly white collar, green socks and white shoes. She bares a striking resemblance to Janice Emmons.

In Snoopy's Town Tale, she retains her appearance from Snoopy, Come Home, except that her bow and dress are coloured light pink.

In Snoopy Presents: It's the Small Things, Charlie Brown, she wears a blue headband, a light blue dress, blue socks and saddle shoes. She retains her hairstyle from the comic strip.

Sketches of Lila and Snoopy

Lila, as she appears in Snoopy Presents: It's the Small Things, Charlie Brown 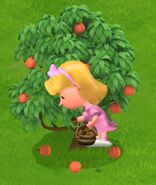