View source
watch 01:41
Who is Linus?
Do you like this video?
Play Sound

Sally (one-sided, when she claims he is her "Sweet Babboo"), Lucy (mostly), Rerun (When he complains about his blanket)

Hanging out with Charlie Brown, Miss Othmar, his security blanket

The loss of his security blanket, being told that the Great Pumpkin does not exist, being called "Sweet Babboo" by Sally Brown, Lucy bossing him around

"Linus, my serious side, is the house intellectual, bright, well-informed which, I suppose may contribute to his feelings of insecurity"

Linus van Pelt is a major character in Charles M. Schulz's comic strip Peanuts. He is Lucy and Rerun's brother, and the middle child of the van Pelt family. Linus always means well and tries to smooth over any storms that arise amongst the gang. One of his sources of frustration is his sister Lucy, who always belittles him, particularly over his security blanket. In spite of his insightful nature, he has a naive belief in the Great Pumpkin. He is Charlie Brown's best friend. His favorite teacher is Miss Othmar, who he is also in love with.

Lucy's baby brother was first mentioned on July 14, 1952. Linus first appeared on September 19, 1952, as a baby too young to sit up by himself and was not given a name until three days later. However, he soon aged to just slightly younger than the rest of the cast. He first stood up on June 30, 1953, and is first seen walking on August 20, 1953, and continues doing so for a few more strips before he strangely reverts to crawling. He is first seen with his blanket on June 1, 1954. He finally goes back to walking on a regular basis on June 29, 1955. On September 15, 1955, he first talks in full sentences. In the strip from January 18, 1956, he becomes friends with Charlie Brown.

In the strip from February 5, 1962, Linus begins to wear glasses. However, by July 17, 1962 of that year, his ophthalmologist had told him that he does not have to wear them all the time, and they are phased out completely after the Sunday strip of September 9, 1962. In the strip from June 9, 1986, Linus claims that his birthday is in October.

Linus was eccentric from the start. As a baby and a toddler, he had a fascination with building impressive structures, mostly with blocks and playing cards. He would instantly learn skills; when his friend Charlie Brown handed him a basketball, Linus bounced it at lightning speeds before shooting and scoring in the trash can. The only thing he couldn't do was blow balloons correctly, they would always end up being cuboid instead of rounded for no conceivable reason. He was more intolerant of his sister's torments than he later would be, and would throw something at her or pretend to shoot her while screaming "BANG!". His appearances and his sentences were small, but both would increase as he started leaving the house more, often being told incorrect facts about the world by Lucy, which he would believe and get scared of.

Linus' age would quickly accelerate, stopping upon being just slightly younger than the rest of the characters. Despite his youth, Linus is incredibly smart, acting as a philosopher and theologian, often quoting the Bible. He is kindhearted and caring, and he listens to the problems of others by the wall or elsewhere and, if not a joke, he would have something helpful to say or do.

In contrast to his advanced intellect, Linus has two of the strangest traits out of the entire cast, ones that make the fact that he sucks his thumbs and thinks that one is sweeter than the other look like nothing unusual. The first is his belief in The Great Pumpkin, which started on October 26, 1959. Apparently started by the confusion of Santa Claus and the commercialization of Christmas poisoning children's minds, he solely believed that the Great Pumpkin would rise from the pumpkin patch he finds is most "sincere", before flying around the world to bring toys to all the good children. This delusion causes Linus to sit in a local pumpkin patch and wait for him to rise out of it. He was able to gain, in Marcie's words, a "disciple" occasionally, such as Peppermint Patty and Sally, but something would always ruin it for Linus, and he obviously never got to see the non-existent entity.

The second and most famous and downright signature trait is his security blanket. Ever since its introduction on June 1, 1954, he has carried it with him over his shoulder in most of his appearances even when others make fun of him for it. Without it, Linus is inexplicable paranoid, and ends up fainting, shaking, sweating, and showing other traits of intense sickness and worry. Lucy makes numerous attempts to break Linus of his blanket habit, and Snoopy tries to steal the blanket for himself, but Linus would never let up. The blanket makes for a peculiar multi-tool for Linus, as he can use it as a whip, a parachute and as a means to grab long range objects. Linus is extremely accurate when using his blanket as a whip, being able to hit a falling nickel in the air without warning. In later strips, Linus was seen less and less with his blanket. Charles Schulz said in 1989 that Linus had outgrown his blanket and it only appeared in strips that were dependent on it.

Linus became a valued member of Charlie Brown's baseball team. He is usually seen playing second base, however, he has on occasion played as Pitcher in place of Charlie Brown when he has been unwell. Usually, when Linus is pitcher, the team wins the game.

Linus has a rocky relationship with his older sister, Lucy. She often treats him as her personal servant and hits him at times for no reason. Linus usually gets back at Lucy in subtle ways, such as pointing out that she has forgotten how to smile.

Despite having named his own younger brother, Linus' relationship with Rerun is rarely shown. Both of the van Pelt brothers are most often shown interacting with their sister, Lucy. At various points in the strip, Linus is shown comforting a crying infant Rerun, teaching basketball to him as a toddler, and in later years discussing the crabbiness of their sister. Linus also attempts to convince his brother of the existence of the Great Pumpkin. However, a skeptical Rerun expresses embarrassment at his brother's beliefs, and of his reliance on a security blanket. Rerun is even shown mocking Linus over these issues.

When Sally Brown was introduced in the strip, Linus initially had a crush on her, but he quickly outgrew it. Sally Brown then developed a crush on him, often calling him her "Sweet Babboo." Linus, for his part, resists her advances.

In the late 1950s, he developed a somewhat intense (but short-lived) crush on his teacher, Miss Othmar. This initial crush ended when it was revealed that she did not like security blankets. Linus commented, "Who's Miss Othmar?" during this time, answering the question of Miss Othmar vs the blanket. Linus does return to like her, though, after they make a deal where Miss Othmar has to stop biting her fingernails, and Linus gives up the blanket. They come to he compromise where Linus cannot bring the blanket to school. During Miss Othmar's strike, Linus rushes to help her up and pick up her sign after the collapsed. After this, she was fired. Linus did not like the replacement, Mrs. Halverson, stating, "We Othmarites are very stubborn".

In the 1980s, Linus developed a crush on a girl named Lydia, who sits behind him in school. Whenever Linus talks to her, she asks him, "Aren't you kind of old for me?". Linus liked her at first, but he soon began to find her annoying and eventually treated her the same that he treated Sally.

Linus has a good relationship with Snoopy, at least while Snoopy is fantasizing about being Joe Cool or the World Famous Attorney. In the strip from May 12, 1972, after Lucy has kicked Linus out of the house during the time that their mother is in the hospital. Joe Cool allows Linus stay at his "dorm" (that is to say Snoopy's doghouse). Linus also offers Snoopy advice about legal issues whenever the beagle is playing the World Famous Attorney. For example, Sally Brown once physically injured Linus, resulting in Linus using Snoopy as his lawyer (Sally cheats by threatening to throw Snoopy's supper dish over the fence should Linus sue her). However, they do have their quarrels, mainly over Snoopy's desire to take Linus' security blanket for himself. A recurring gag in the strip involves Snoopy grabbing the blanket in his mouth and dragging Linus around to make him let go. Occasionally, Snoopy goes as far as to swing around the blanket, with Linus still attached to it, before letting it go, sending the boy flying through the air. As a result of this treatment, Linus often refuses to let Snoopy near him when he knows the dog is after his blanket. Many strips show Linus threatening to inflict physical harm on Snoopy, easily scaring the beagle into submission. Despite all this, Linus and Snoopy remain on friendly terms.

Linus through the years. 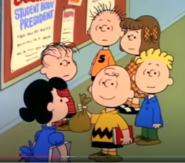 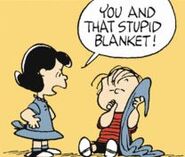