The Little Red-Haired Girl is an unseen character in the comic strip Peanuts by Charles M. Schulz. She was first referred to in 1961. She is Charlie Brown's crush, despite his being afraid to go near her. Whether or not she has any feelings towards Charlie Brown was never going to be revealed in the comic strip, until she was going to approach him in the November 14 1963 strip.

Her name is given as Heather in the 1977 animated TV special It's Your First Kiss, Charlie Brown and as Heather Wold in the 2015 animated film The Peanuts Movie. Those names, however, have never been used in the Peanuts comic strip. She appeared in Apple TV+'s The Snoopy Show segment, Dress-Up Snoopy, but it is unknown who voiced her.

The only known Schulz drawing of the Little Red-Haired Girl was drawn sometime in 1950, long before she was referred to in the strip. Why Schulz did not introduce her into the strip when it started is unknown. She bears a strong resemblance to Patty, a character who was prominent in the early years of the strip.

Even though she is often referred to in the comic strip, the Little Red-Haired Girl is never seen, except in the strip from May 25, 1998, in which she is seen in silhouette.[1]

One reason Schulz never drew the Little Red-Haired Girl in the strip, is to show Charlie Brown's hopeless longing for her. Schulz also admitted in 1997, "I could never draw her to satisfy the readers' impression of what she's probably like."

The character was based on Donna Johnson, a red-haired woman who Charles M. Schulz proposed to but turned him down. This is where Schulz got the idea for Charlie Brown's unrequited love years later along with many of the other characters.

The Little Red-Haired Girl has been shown on television in It's Your First Kiss, Charlie Brown, Happy New Year, Charlie Brown!, A Charlie Brown Valentine, the second season opening of The Charlie Brown and Snoopy Show, and makes a brief appearance in Snoopy!!! The Musical, during the song "Poor Sweet Baby". She also appeared on the Apple TV+ series The Snoopy Show.

The Peanuts Movie (in which the Little Red-Haired Girl is voiced by Francesca Capaldi, who also voices Frieda) is the first animated production in which the character has a speaking part. In the film, Heather's full name, Heather Wold, can be seen as fourth in the list of the students' test scores.[4] Her last name comes from the married name of the character's inspiration, Donna Johnson Wold.

Heather is kind and very soft. She is also revealed to love how honest, kind, caring, compassionate, brave, and funny Charlie Brown is. According to You're in Love, Charlie Brown and Francesca Capaldi it is revealed that the Little Red-Haired Girl has a crush on Charlie Brown too.

Due to never fully appearing in the comic strips, Heather the Little Red-Haired Girl's design has never been consistent:

In It's Your First Kiss, Charlie Brown and Happy New Year, Charlie Brown!, Heather has long red hair in a flip-style, a pointy nose and rosy cheeks. In her first appearance, she wears a short pink dress accompany with a dark pink robe, white socks and black Mary Janes shoes. She also wears a gold crown on her head. In her second appearance, She is shown wearing a pink dress with the skirt sometimes shown as flouncy, and is also shown to have a round nose, like many of the Peanuts characters.

In The Charlie Brown and Snoopy Show, she retains her rosy cheeks and has short red hair in a flipped hairdo, similar to Mary Jo.

In a fantasy in the animated version of Snoopy!!! The Musical, she retains her physical appearance except her hair is a little shorter, her nose is a different shape, and is missing her rosy cheeks.

For A Charlie Brown Valentine, Heather's appearance was changed. She has curly bright red hair, similar to Frieda. She wears a purple dress, white socks and purple shoes. Like in her second appearance, she has a round nose.

In the 2015 CGI The Peanuts Movie, Heather is depicted with shorter fiery red hair in a flip-style, and wears an aquamarine bow in it. She now wears a dress the same style as Lucy's, except it is turquoise. On her feet, matching socks and white Mary Jane shoes are worn.

Heather makes a minor appearance in The Snoopy Show, dressed as a bunny for a Halloween party. Here, she retains her hairstyle from the CGI movie. 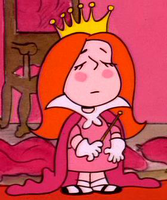 It's your First Kiss, Charlie Brown 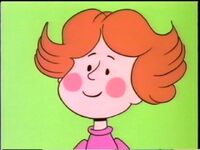 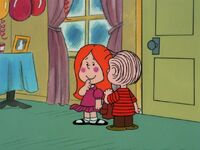 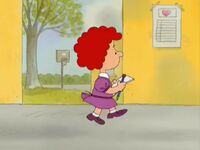 Heather in the crowd

Heather's name on the test score 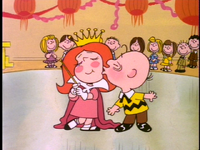 Heather getting kissed by Charlie Brown

Heather at the party

Heather in The Peanuts Movie credits

Heather sitting at the cafeteria table with Violet, Lucy, and Patty

Heather looks at Charlie Brown in the Winter Dance and she is cheering for him.