Peanuts Wiki
Register
Don't have an account?
Sign In
Advertisement
in: Marcie, Girls, Characters introduced in 1971,
and 8 more
English

Athletics, being constantly followed around and tormented with chauvinistic insults by Thibault, receiving criticism from Peppermint Patty for her lack of knowledge in sports and minor mistakes

Marcia "Marcie" is a major female character, known for her unassuming sweetness and intelligence. She was officially introduced into the cast of Charles M. Schulz's Peanuts comic strip on July 20, 1971 (although a look-alike character named "Clara" appeared in the strip with her friends Sophie and Shirley as early as 1968). Her bookishness is contrasted with her best friend, tomboy Peppermint Patty, whom she always refers to as "sir"—one of many malapropisms she has. Marcie is insightful and introverted but always willing to help and is usually the voice of reason.

Marcie was never given a last name in the strip. In the TV special, You're in the Super Bowl, Charlie Brown, her last name is Johnson. In The Peanuts Movie, it is Carlin.[1]

Marcie is an intellectual and a bookworm. She is well known for the high quality of her schoolwork, which provides a perfect contrast to Peppermint Patty's ineptness and has provided dozens of punchlines in the strip. She also has a talent for ice skating and music, she has taken organ lessons with Mrs. Hagemeyer (Miss Othmar's married name). Although not a hater of athletics (she admired the success of Billie Jean King, for example, and also likes caddying golf), her knowledge of sports often seems to be lacking and the rules appear to confuse her (Peppermint Patty: "There's no penalty box in baseball!").

Marcie also has a deep appreciation for the arts. In addition to her organ playing, many of the series' later gags involve her attending "Tiny Tots" concerts with Peppermint Patty, where she once again plays "straight man" to Peppermint Patty's cluelessness about the concerts themselves.

While Marcie is very smart and wise, she has sometimes shown naivete and can be goofy; as seen in the TV special It's the Easter Beagle, Charlie Brown, in which she repeatedly fails to understand the proper way to prepare Easter eggs.

When the actions of Snoopy's World War I Flying Ace alter-ego shifted from fighting the Red Baron to fighting the demons of lost love and loneliness, Marcie would act as friend, confidant, and ultimately the "French Lass" for the flying ace on his sojourns to the Moulin Rouge.

Despite catering to Snoopy's fantasy thoughts, it is Marcie herself who finally shouts out to Peppermint Patty (after a suspenseful fight sequence) that Snoopy's doghouse is not a guest cottage and that Snoopy himself is a beagle, not "that funny looking kid with the big nose."

Such outbursts by Marcie, however, are very rare; and do not disguise the fact that she is one of the all-around sweetest, most caring, and smartest of the characters in Peanuts.

Marcie has short dark hair (sometimes shown as dark brown and sometimes as black in animated cartoons). She wears a T-shirt and pants in all her appearances. She has never been depicted wearing a dress, unlike most of the other girls. She also wears glasses which hide her eyes that have only been shown in very rare instances. In most of the animated cartoons, her shirt is colored orange and her pants are shorts. In The Peanuts Movie, she wears a red T-shirt with black pants and white sneakers.

In a series of strips from October 1977 and November 1977, Marcie joins Linus in waiting for the Great Pumpkin (misidentifying him as "The Great Grape"). Her family reacts poorly and comes to take her from the pumpkin patch. Marcie later recounts the experience of being "de-programmed", which consisted of being harshly scolded at great length.

According to the strip from June 13, 1975, Marcie's grandfather plays left-wing in the World Hockey Association (a short-lived competitor to the National Hockey League that existed from 1972 to 1979).

We learn from a series of strips starting October 15, 1990, that Marcie's parents are demanding and expect their daughter to be perfect and get straight A's in school. On one occasion, an exhausted Marcie heads to Charlie Brown's house while taking a break from reading "Ivanhoe" and opens up to him about all the pressure she is under. She also reveals her parents have already picked a college for her and that all they care about is her academic performance. She ends up wondering if a parent can love a child who does not get perfect grades.

Marcie has affectionate feelings for Charlie Brown as well. Unlike Peppermint Patty, Marcie is not the kind to hide her emotions, often speaking openly and from the heart. She is always rebuffed, however, as Charlie Brown never quite gets the message. In one daily strip, Marcie kisses Charlie Brown (causing his hat to fly up over his head and hover there, and Snoopy to wonder "How does he do that?") and she says she knows that he could never want a girl like her so she will just leave him alone.

Marcie has played with Snoopy in his fantasy life. On some occasions, Snoopy has been shown to have a love interest in Marcie, but Marcie never returns his feelings.

Marcie has had little interaction with Linus, despite them both being smart bookish characters. This could be a result of the two living in different neighborhoods and attending different schools in the comic strip.

In Bon Voyage, Charlie Brown (And Don't Come Back!!), they are both chosen to be exchange students in France along with Charlie Brown and Peppermint Patty. Marcie is shown to care for Linus as she rushes to his aid almost immediately after she discovers that the Château du Mal Voisin is on fire.

Franklin and Marcie live in the same part of neighborhood, so they interact quite often. They often make fun of Peppermint Patty’s habit of falling asleep during class. Franklin may have a crush on her, as shown in Race for Your Life, Charlie Brown, when he leads her in a waltz.

Marcie's eyes in "School Patrol" in the episode Chaos In the Classroom in The Charlie Brown and Snoopy Show.

Marcie with a book and the title The Peanuts Movie.

Peppermint Patty yelling at Marcie for joking that there was a snake in "The Mayflower Voyagers". 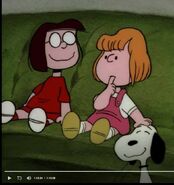 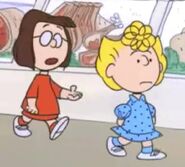 Marcie looking at the toaster 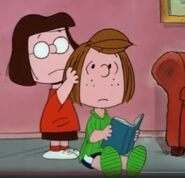 Marcie from You're a good sport Charlie Brown 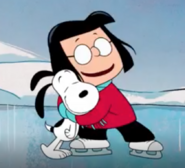 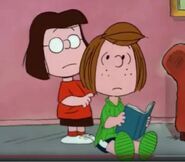