The most beautiful girl, My star guest (Linus)

A world without flowers

Mimi is a very minor female Peanuts character who has never appeared in the strip, but she does appear in the TV special, It Was My Best Birthday Ever, Charlie Brown. She was voiced by Jamie Cronin, who also voiced Lucy van Pelt in the same special, and her singing voice was done by Cathy Cavadini.

On his way home from a birthday party, Linus overhears beautiful singing coming from a garden. He enters the garden looking for whoever's singing the song. He then finds a little blonde haired girl name Mimi. Linus becomes attracted to her because of her beautiful singing voice. She is staying at her grandma's house for a week when Linus, who was on his way home at the time, meets her. She teaches Linus about flowers, telling him that she finds flowers fascinating. Linus invites her to his upcoming birthday party.

Linus cannot get her off of his mind. He constantly thinks about her and her beautiful voice. She does not show up at his party right away, which makes Linus very anxious. At the end, however, she does show up, sings "Happy Birthday" to Linus, kisses him, and hands him a flower much to his delight, before she leaves.

She was introduced in the town simulator game Snoopy's Town Tale in 2018 as part of the Easter. Here, she retains her appearance from the TV special. However, she was removed from the game in 2019 due to copyright issues. She, alongside Polly and Dolores are the only non-comic strip characters to be released in the game.

Mimi is shown to be very courteous and kind-hearted little girl. She is also a horticulturist as she likes flowers, hence her working in the garden at the time. She also likes to sing.

Mimi has medium-length golden blonde hair and blue eyes. She wears a beige sun hat with a magenta ribbon around it, a purple dress with a white apron and matching purple shoes. Her hair is held in short pigtails, and she is about as big as Linus himself is. Her color scheme is similar to Janice Emmons's.

She retains her original appearance in Snoopy's Town Tale, except her hat is white and her dress and shoes are colored pink.

Linus and Mimi meeting for the first time

Mimi kissing Linus before she leaves 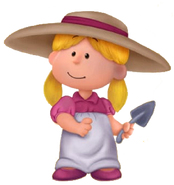 Mimi as she appears in Snoopy's Town Tale 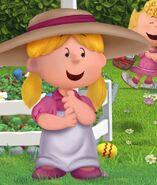 Mimi in the Easter 2018 event in Snoopy's Town Tale 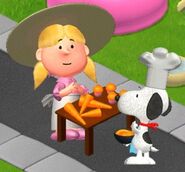 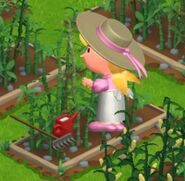 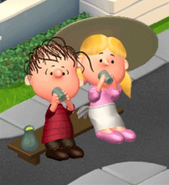 Mimi and Linus having lemonade together

Production Cel of Linus with Mimi, note how her eyes appear blue

Linus helping Mimi out with her garden