Peanuts Wiki
Register
Don't have an account?
Sign In
Advertisement
in: Patty, Girls, Characters introduced in 1950,
and 7 more
English

View source
watch 01:07
Who is Patty?
Do you like this video?
Play Sound

Not to be confused with Peppermint Patty, a different and later character from the same strip.

—Charles M. Schulz on Patty and the female bullies Lucy and Violet

Patricia "Patty" is a supporting female character from the early Peanuts comic strips by Charles M. Schulz. Her closest friend is Violet.

Although a major character in the year of the strip's debut and for a few years thereafter, Patty's personality was never fully developed and she lacked characteristics that strongly differentiated her from other characters. By the mid-1960s, Patty had been relegated to the background and, although she made occasional appearances throughout most of the remainder of the strip's run, she had virtually disappeared from Peanuts by the 1970s.

The prototype version of Charlie Brown, Patty, and Snoopy all appear in the pre-Peanuts strip Li'l Folks. She was named after Schulz's cousin, Patricia Swanson.

In the early days of the Peanuts comic strip, Patty was one of its major characters. Although she was not named until October 26, 1950, Patty appeared in the very first strip on October 2, 1950, along with Charlie Brown and Shermy. However, since she and Shermy lacked the defining characteristics of such characters as Lucy, Linus, and Schroeder, they became less prominent as years went by.

As the only female in the strip's earliest days, Patty was often portrayed as a sort of "mother-hen" character who looks out for the younger characters; however, she would also set the tone for the strong female characters that would later appear in the Peanuts universe. In her second appearance, Patty is seen walking down the sidewalk reciting, "Little girls are made of sugar and spice and everything nice." She then punches Charlie Brown in the face and, without missing a beat, continues, "That's what little girls are made of!" Patty was apparently the oldest child in the early days of Peanuts, as shown by one strip which revealed that she attends school but Charlie Brown does not. Eventually, she, along with Violet, became best known for their social snobbery and combined cruelty to Charlie Brown. It has once even been noted that she often kicks down his sandcastles whenever he makes one (though this has only been shown once or twice in the strip). Patty is also known for asking "Pig-Pen" why he is constantly so dirty.

Patty's name was first mentioned on October 26, 1950, 24 days after her first appearance.

Patty's birthday is December 4. She plays outfield on Charlie Brown's baseball team; though on an early occasion she was seen as a catcher before Schroeder was introduced. Interestingly, it was Patty who first introduced Charlie Brown to Schroeder, claiming he lived next-door to her.

Patty is fair-haired. Over the years, she has variously been shown with blonde, red and light brown hair. Although she is a brown-haired brunette in most of the TV specials and movies, she is a blonde in The Peanuts Movie (possibly as this was her first sizable role in decades she would not share the same hair color with the other more prominent Patty) and a black-haired brunette in It Was My Best Birthday Ever, Charlie Brown. Her clothing consists of a checkered dress paired with a matching bow in her hair and (usually black) Mary Jane shoes. Patty's dress and bow are colored orange in the television specials and in the movies A Boy Named Charlie Brown, Snoopy, Come Home, Race for Your Life, Charlie Brown and Bon Voyage, Charlie Brown (And Don't Come Back!!). In The Peanuts Movie onward, her dress and bow are colored light green.

In TV specials, movies, and musicals

Like most Peanuts characters, Patty has appeared in numerous Peanuts television specials throughout the years, as well as all five movies, although she becomes an increasingly minor character after the 1960s.

Patty was a prominent character in Peanuts until around 1960, after which she began to appear less and less often. Although Patty (or at least unnamed characters who bear a strong physical resemblance to her) would make cameo appearances throughout the run of Peanuts, she had pretty much disappeared as a featured character by 1976. Schulz claimed he drew Patty in a March 1994 strip in which she asks Snoopy to chase rabbits with her, but some fans have stated that the girl in the strip does not resemble Patty. Some have postulated that Patty's doom was sealed by the appearance of the similarly-named Peppermint Patty in 1966, but others say her character was already in decline by then.

Patty attempting to date "Pig-Pen" at the Winter Dance, much to Violet's disgust. 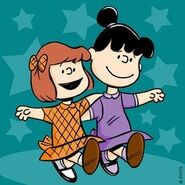 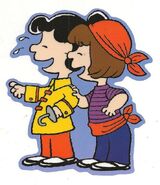 Patty and Violet as pirates.

Patty and Violet dancing during the end credits of The Peanuts Movie.

Patty, Violet and "Pig-Pen" in Happiness is a Warm Blanket, Charlie Brown.

Charlie Brown and the girls at the Halloween party

Patty and Little Red-Haired Girl laughing at Snoopy after a mishap with the big pumpkin.

Patty and Violet skipping together in The Snoopy Show.

Patty and Violet dancing together in Snoopy Presents: For Auld Lang Syne.