Released on VHS and Betamax in 1979. First movie released on RCA's SelectaVision in 1982 (alongside the A Charlie Brown Festival series). Re-released on VHS in 1988 and 1995. Released on DVD in 2015. No Blu-ray release announced.

The Peanuts gang heads off to Camp Remote somewhere in the mountains, where they ultimately compete in a river rafting race; Charlie Brown, true to form, is accidentally left behind by the bus while at a desolate rest stop. He then is forced to ride on Snoopy's motorcycle in order to make the rest of the journey to camp, accompanied by rock guitar type riffs while he is shouting in fear at Snoopy's wild driving.

Upon their arrival, the children are immediately exposed to the regimentation and squalor of camp life, a stark contrast to their comfortable residences back home. They have to get used to the camp schedule being communicated in military time (Franklin asks if "oh-five hundred" [5:00 AM] is noon, and Sally thinks "eighteen-hundred" [6:00 PM] is a year). Although they do their best to adjust to the rigors of camp at life, Snoopy, in a comfortable tent of his own, enjoys eating a banana split while watching TV on his portable set.

The gang must contend with a trio of ruthless bullies (and their cat, Brutus, vicious enough to intimidate even Snoopy) who openly boast of their having won the race every year they have competed. The only thing that keeps the bullies at bay is Linus using his security blanket like a whip (which also gets him unwanted attention from Sally due to her praising the courage of her "Sweet Babboo"). It is revealed that the bullies' "success" has always been through outright cheating, using a raft equipped with an out-boat motor, direction finder, radar and sonar, and even resorting to every trick in the book they could think of to hamper or destroy everyone else's chances to even make it to the finish line, much less win the race. However, the bullies' greatest flaw is their overconfidence. They blast ahead at the starting line, while looking back laughing and smirking at the others they crash into a dock. The bullies are then forced to dislodge themselves from the dock while the other boats sail past, evaporating their ill-gotten head start.

The children are broken into three groups: the boys' group: (consisting of Charlie Brown, Linus, Schroeder and Franklin), the girl's group: (consisting of Peppermint Patty, Marcie, Lucy and Sally), and Snoopy and Woodstock. Charlie Brown is very reluctant leader of the boys' group, well-meaning but struggling with his insecurities. His foil is Peppermint Patty, the leader of the girl's group, who is very confident despite her incompetence as a leader; much of why she is incompetent as a leader is due to her insistence on every decision, no matter how minor, being confirmed by a group vote. True to Peppermint Patty's persona, when the outcome is unfavorable to her or ends in a tie vote, she tends to overrule the decision.

The groups run into different obstacles: getting lost, stranded, storms, blizzards, and sabotage from the bullies. Snoopy abandons the race to search tirelessly for Woodstock, when a storm separates them; after a long search, they manage to find each other and are joyfully reunited. When the bullies sabotage the rafts of Peppermint Patty and Charlie Brown, the boys and girls' groups work together on one raft, with Charlie Brown as the leader of the merged group. Charlie Brown starts to grows more into his leadership role. The group goes down a log chute akin to a water slide at an amusement park. However, this is noticed by the bullies, who stop the water wheel by jamming it with a log, which results in merged group being stuck atop the wheel. Charlie Brown says as leader, it is incumbent on him to tackle problems, and makes a dangerous descent down the water wheel to remove the log, getting the group moving again.

Thanks to Charlie Brown's growing self-confidence and leadership, the gang is about to win the race at the climax after overcoming considerable odds. Unfortunately, Peppermint Patty incites the girls to celebrate too soon and they accidentally knock the boys overboard in their excitement; when they attempt to rescue them, the bullies seize the opportunity to pull ahead.

The bullies gloat about the apparently imminent victory, but since their raft has suffered numerous damages throughout the race, it sinks before the finish line. This leaves Snoopy and Woodstock as the only contenders left. Brutus sinks Snoopy's inner tube by piercing it with a claw after the bullies grab it, but Woodstock builds a raft of twigs and continues toward victory. When Brutus tries to attack Woodstock, Snoopy punches him in the face, and Woodstock wins the race. Conceding defeat, the bullies begin to vow vengeance next year, but their threats are humiliatingly cut short when Snoopy hands Brutus a rough beating after he threatens Woodstock again.

As the gang boards the bus to depart for home, Charlie Brown decides aloud to use the experience as a lesson to be more confident and assertive, and to believe in himself. Unfortunately, right after he finishes speaking, the bus leaves without him for the second time, and as before, he is forced to hitch a ride with Snoopy again.

Patty, Violet, "Pig-Pen", Shermy, 5, Frieda and Roy appear but they are silent. 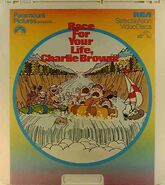 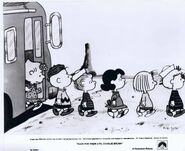 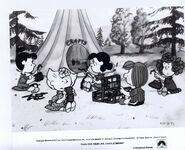 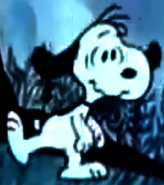 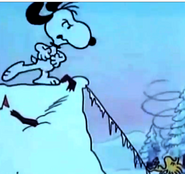 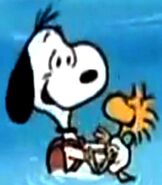 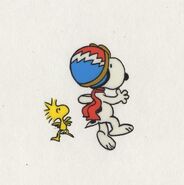