Peanuts Wiki
Register
Don't have an account?
Sign In
Advertisement
in: Schroeder, Characters introduced in 1951, Boys,
and 3 more
English

"I kind of like Schroeder. He’s fairly down to earth, but he has his problems too. He has to play on the painted black piano keys, and he thinks Beethoven was the first President of the United States."

Schroeder is a major male character in the Peanuts comic strip by Charles M. Schulz. He is distinguished by his precocious skill at playing the piano, as well as by his love of classical music and the composer Ludwig van Beethoven in particular. Schroeder is also the catcher on Charlie Brown's baseball team and the object of Lucy van Pelt's unrequited love.

After Linus van Pelt and Snoopy, Schroeder is probably Charlie Brown's closest friend; he once angrily denounced Violet for giving Charlie Brown a used Valentine well after Valentine's Day had come and gone (only to be undercut when Charlie Brown eagerly accepted it), and he is one of the few baseball players who has any respect for Charlie Brown as a manager (although he is as capable of ire at Charlie Brown's poor performance as anyone else, such instances are few and far between).

Schroeder was introduced as a baby on May 30, 1951. Within a short time, however, he had aged to nearly the same age as the other characters. He initially had no notable characteristics, but Schulz eventually had the idea to incorporate his daughter Meredith's toy piano into the strip. He decided to give it to the strip's newest character, and thus the character as he is known to millions of fans was born. The origin of his name can be found in Schulz's 1975 book, Peanuts Jubilee:

"Schroeder was named after a young boy with whom I used to caddy at Highland Park golf course in St. Paul. I don't recall ever knowing his first name, but just 'Schroeder' seemed right for the character in the script, even before he became the great musician he now is."

In the September 24, 1951 strip, Charlie Brown makes an attempt to show the infant how to play a toy piano but is quickly embarrassed when Schroeder completely outclasses him. However, his love for Beethoven specifically did not begin until October 10 of that same year.

Schroeder is an accomplished musician, although his piano is only a toy, and the black keys are merely painted on to the white keys. In one strip, Charlie Brown tries to get him to play a real piano, but Schroeder bursts out crying, intimidated by its size.

Ludwig van Beethoven is Schroeder's favorite composer, as revealed in the February 27, 1955 strip. In it, Lucy takes his bust of Beethoven and smashes it, but Schroeder simply takes another one from a closet full of Beethoven busts. Every year, Schroeder marks Beethoven's birthday on December 16, although in a series of strips from December 1957 he forgets the date, is in shock when he finds out about it the following day and feels terrible for several days afterwards. When Charlie Brown's baseball team was required to have a sponsor to play games, Schroeder chose "Beethoven" as a sponsor. In the early strips, Schroeder also played music by other composers. Schulz once remarked that he had originally decided to depict Johannes Brahms as Schroeder's favorite composer, but decided that Beethoven sounded "funnier."

Another distinguishing character trait of Schroeder is his constant refusal of Lucy's love. Lucy is infatuated with Schroeder and frequently leans against his piano while he is playing, professing her love for him. However, since Beethoven was a lifelong bachelor, Schroeder feels that he must emulate every aspect of his idol's life - even though it is insinuated that he reciprocates Lucy's feelings. In a story arc where she and the rest of her family have moved out of town, Schroeder becomes frustrated with his music and mutters disbelievingly that he misses her. Despite his constant animosity towards her, Schroeder would come to realize that Lucy has unwittingly become his muse and he cannot play without her. In the December 16, 1984 strip,[1] Schroeder kisses Lucy on the cheek, but when Lucy turns around, she sees Snoopy instead. Believing Snoopy was the one who kissed her, she runs away screaming, while Schroeder calls for her to come back; showing he has some feelings for Lucy.

Schroeder is a member of Charlie Brown's baseball team, often seen as a catcher (notably as far from outfielder, Lucy, as possible). In this capacity, he has often been shown to provide backhanded compliments on Charlie Brown's pitching. Also, he will run through a list of complicated signals, only to end up with something to the effect of, "Just throw it down the middle. He'll hit it out no matter what you throw, anyway." He is also described as a good hitter, 'one of the best on the team' Charlie Brown said in one strip. He has also shown a love for hockey in some of the Peanuts comic strips, as well as some television specials.

The shirt that Schroeder wears has thick black stripes. In the animated TV specials and movies, it is colored purple.

Schroeder lives on 1770 James Street, which was revealed in the August 14, 1952 strip. He mentions that the street number is easy to remember because it was the year that Beethoven was born.

Schroeder has a contempt for popular non-classical music. On one occasion Lucy has Snoopy play polkas and waltzes on an accordion and says to Schroeder that, "That's the sort of music people like", whereupon Schroeder puts his hands to his ears and walks away, saying that he cannot stand it. On another occasion Lucy, while leaning against Schroeder's piano as usual, suddenly whispers to him, "Pssst... Hooray for Irving Berlin" — and had to quickly run away as an infuriated Schroeder throws his piano at her.

Schroeder is one of Charlie Brown's closest friends. They have conferences on the pitcher's mound, in between pitches, mostly about Beethoven. He also often encourages Charlie Brown during a baseball game, whereas the rest of the team say, "Don't let us down by showing up!"

At various times Schroeder has been the first to defend Charlie Brown, for example, in one strip he berates Violet for giving Charlie Brown a used Valentine the day after Valentine's Day just to avoid any guilt.

Schroeder does not appreciate Lucy's love for him. He says, he cannot like Lucy (or possibly anyone), because Beethoven was a lifelong bachelor, and Schroeder feels he must emulate every aspect of his idol's life, even if it is insinuated that he reciprocates Lucy's feelings. However, Schroeder does not mind Lucy listening to him play and would prefer Lucy over Frieda, or any other girl, having shown feelings for her occasionally — as when he offers her a Valentine after asking her if it is appropriate to offer one even when one merely tolerates another's presence.

Frieda, like Lucy, likes to lie on Schroeder's piano, and Schroeder usually does not like it when she does it. He does not have any feelings for Frieda.

Snoopy will often watch, listen and dance as Schroeder plays his piano, often responding to the mood of the music with different poses and expressions, and many times, Snoopy will play with the notes. In the later years when the notes actually fell off the piano, Snoopy played with those too.

The piano's capability is illustrated in 1965's A Charlie Brown Christmas. Lucy asks Schroeder to play "Jingle Bells". Schroeder plays it in the style of a conventional piano, then manages to generate the warm tones of a Hammond organ, but Lucy cannot recognize the tune until the now-irritated Schroeder plays it, with one finger, in the tones of a normal toy piano. It is the only time in the history of the television specials that his toy piano ever actually sounds like a toy piano, with 'plinking' sounds.

Schroeder is normally a very impassive character, content to play his music, but can be angered quite easily if his music or his idol Beethoven are insulted. In one short Lucy points out to him the woefully inadequate single-octave range of a toy piano; an angry Schroeder yanks it out from under her and sends her flying. On another occasion, Lucy asks if pianists made a lot of money, and Schroeder flies into a rage, saying, "Who cares about money?! This is art, you blockhead! This is great music I'm playing, and playing great music is an art! Do you hear me? An art! Art! Art! Art! Art! Art!" (the last five words punctuated by slamming his hands against his piano).

The musical notes Schroeder plays also seem to have substance; characters are able to touch them as they appear in the air. Snoopy, for example, once decorated a Christmas tree using a handful of them, and has on at least one occasion been seen dancing atop the musical staff containing the notes.

On three occasions, Lucy has destroyed Schroeder's piano in an attempt to be rid of the "competition" for his affection. She first threw it into the Kite-Eating Tree, which apparently eats pianos as well. Her second attempt had her throw the piano down a sewer, from which it was eventually washed into the river and out to sea. Schroeder ordered his replacement pianos from the Ace Piano Company. Along with his new piano, Schroeder received an autographed photo of Joe Garagiola. Another time Lucy destroyed both his piano and his bust of Beethoven; Schroeder calmly picked out a new piano and bust from a closet well-stocked with duplicate pianos and busts.

The Broadway musical You're a Good Man, Charlie Brown featured Skip Hinnant as Schroeder in the 1967 version and the African-American actor Stanley Wayne Mathis in the 1999 version. 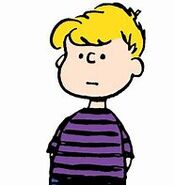 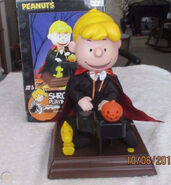