You're the Greatest, Charlie Brown

Life Is a Circus, Charlie Brown

A notable difference from previous Peanuts TV specials is that the voices of adults, including teachers, are heard as comprehensible English instead of the "wah wah" trombone sound. Subsequent animated specials would return to using that sound instead of adult voices.

Schulz's daughter Amy Schulz has a small role in She's a Good Skate, Charlie Brown as the voice of one of the skaters in the competition.

The special opens with Peppermint Patty practicing ice skating on a frozen pond while her coach Snoopy watches and makes grumbling noises to show his dissatisfaction with her progress. Peppermint Patty is dedicated to her skating practice, at one point she and Snoopy knock out a group of boys who want her to get off the ice so that they can play ice hockey. However, Peppermint Patty's dedication means that she has to get up at 4:30am to practice and, as a result, keeps falling asleep in class.

While visiting Marcie's house, Peppermint Patty notices a sewing machine. In spite of the fact that Marcie tells her that it is her mother's sewing machine and that she does not know how to use it, Peppermint Patty insists that she makes a dress for her to wear at the upcoming ice skating competition. Marcie makes a terrible dress without any sleeves that looks more like a poncho. Fortunately, Snoopy comes along, passes the dress through the sewing machine and transforms it into a beautiful creation.

On the day of the ice skating competition, all of the competitors practice together at first. The skaters leave the ice and Snoopy clears it by driving a Zamboni, something that the children in the audience enjoying watching very much.

Schroeder also appears in this special, but is silent.

This special is mainly based on a storyline originally published in November and December 1974, which was the longest storyline in Peanuts history, lasting about six weeks. The strip has other sub-plots that were left out of the special, and changes were made to the storyline by the time it went to the small screen.

In the strip, after the disaster with Peppermint Patty's skating dress, Marcie's mother steps in to make the alterations, rather than Snoopy as in the TV special.

Peppermint Patty arrives at the competition and only at that point finds out that it is for roller skating, not ice skating, but not before she gets into trouble for inadvertently damaging the rink floor with her ice skate blades. Peppermint Patty returns from the competition realizing she still owes Snoopy for her lessons. Having no money, she gives him her wig as payment.

Some of the strips from the storyline were later adapted as the episode "Like Skates on Ice" from the 2014 French TV series Peanuts.

Peppermint Patty wears a sleeveless dress, much to her disgust.

Peppermint Patty believes she is about to cry because she does not like the ruined dress. 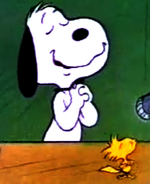 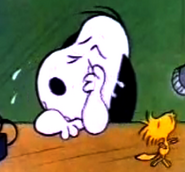 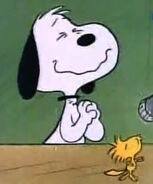 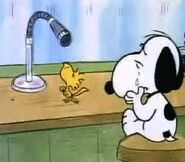 Peppermint Patty's final scores are enough to propel her to the top!

A home media release paired with It's Flashbeagle, Charlie Brown