Snoopy in Space is a Canadian-American children's animated series consisting of twelve episodes. It features Snoopy as he fulfills his dreams and embarks on his next big adventure—becoming a NASA astronaut. Joined by Charlie Brown and the rest of the Peanuts gang, Snoopy takes command of the International Space Station and explores the moon and beyond. The series hails from an exclusive partnership between Apple and WildBrain. It was released on November 1, 2019, on Apple TV+.

The series was nominated for a Daytime Emmy for Outstanding Short Form Children's Program in 2020.

On October 19, 2020, Apple TV+ announced that Snoopy in Space had been renewed for a second season, along with the four new Peanuts specials and its 70th anniversary documentary. 1 year after the announcement of the second season, Apple TV released a trailer for the 2nd season. The name of the second season called Snoopy in Space: The Search for Life follows Snoopy and his friends as they find a signal from what could be intelligent alien life. It was released with all 12 episodes on November 12, 2021, on Apple TV+. 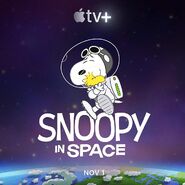 Thumbnail of trailer for 2nd season

Snoopy in Space Coming this fall to Apple TV-0