Although Sally is 6 sand Linus once mentioned he is 5 years older then her, for some reason once the characters get to a certain age they stop aging, even if other characters age. Even though Linus mentioned he is 5 years older than Sally, he is at the end 1 year older than her, meaning he is 7, and Lucy is also 7. Charlie Brown is 8. This might sound strange/impossible, but it's just a comic. Anything can happen.Statue-of-liberty 03:02, December 10, 2010 (UTC)

I wanted to say there are adults in Peanuts and the author of this site is wrong about that one.  She also forgot characters from the Peanut's past including those two twins that are also seen jamming the coolest of all in the Christmas special.

The page adults states that the presence of adults has been indicated in a number of ways. It also says that are some TV specials with exceptions to when adults are outright shown. And as for the two twins, there is a page on them. It is called 3 and 4. Statue-of-liberty (talk) 21:57, December 15, 2013 (UTC)

high i am still very sad about change at moa and i wish it could come back i was just wondering if anyone else has been there because it was really fun and i loved it. that gets me so mad they had to switch it the charles m schulz connection with minneapolis is really great and all theycared about was more money not there familys camp snoopy was really a nice fun great and secluded place i will always miss it. I wish there was a way to turn it back to camp snoopy.

I saw Snoopy on the commercials, TV specials, TV show, and the movies. It was wonderful. Because, I hope it's good for Snoopy and me for the 3-D film.

I spent today getting a tour of Blue Sky Studios, the animation company that made the Peanuts Movie. I mentioned that I was there representing Wikia and the Peanuts Wiki, and I couldn't believe how excited some people were! I had several members of the crew, and the guy who put together the art book, come up and tell me that they frequently used the Peanuts Wiki as a resource. You guys were an invaluable tool for the people making the movie, I thought you would want to hear that.
If anybody is curious, I also asked director Steve Martino whether or not the full names given on the test scores sheet in the Peanuts Movie are "canon" and he said they officially are. - Billy Arrowsmith (Talk), 08:15, March 8, 2016 (UTC)

I still think that only Charles M. Schulz could decide what was or wasn't canon and, of course, he's no longer with us. All the same, I have to say, "Wow!" That is praise indeed! Maybe next time somebody is needed to represent the Peanuts Wiki, Wikia could invite the other admins here and myself. I wouldn't be able to get the time off work or pay the airfare to the States but it would be nice to be asked anyway. Simon Peter Hughes (talk) 13:34, March 8, 2016 (UTC)

It wasn't that kind of thing. I wasn't there specifically representing the Peanuts Wiki, I was there as a Wikia employee and a journalist for Fandom. It was a very small event with a bunch of people from different news outlets and they were only able to send me at all because I was within public transportation distance. - Billy Arrowsmith (Talk), 20:17, March 8, 2016 (UTC)

There will be Polish version soon!

May somebody write it in main page, please?

File:Favicon.ico This may be useful as a reminder for holiday-themed images. For strips, see Category:Strips about holidays.

Snoopy Day: August 4
Add a photo to this gallery

Note that we should have a holiday-appropriate version of the background for Hallowe'en, Thanksgiving, Christmas, New Year's, Valentine's Day, Easter, Beethoven's Birthday, Snoopy Day (August 4). Here's how it looks now:

These images should do for all the holidays

OK. I think I've found images for the wiki's background for every holiday. Here they are.

Christmas (before and after the week of Beethoven;s birthday) 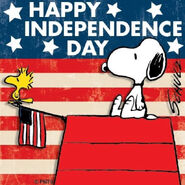 Independence Day? April Fool's? I looked at a lot of the strips and don't see many July 4 references. One for Arbor Day would be appropriate as well but that changes from state to state... —Justin (koavf)·T·C·M 21:56, November 2, 2017 (UTC)

A Google image search for "Peanuts Fourth of July wallpaper" brings plenty of results. There are a few images of Snoopy as the April Fool out there too. I'll see which of those are the right file size later. There are some quite nice (although no doubt unofficial) Peanuts images for Chinese New Year too.Simon Peter Hughes (talk) 07:03, November 3, 2017 (UTC)

Of course, leave it up to Simon to remember how to ring in the Year of the Beagle from Taipei. Thanks a lot. I've changed up the colors seasonally and I will do the same after Thanksgiving for Christmas. —Justin (koavf)·T·C·M 07:27, November 3, 2017 (UTC)

Again, I couldn't find any images for the Fourth of July or April Fool's Day that were the right file size. I have gone ahead and added the two images I like best for those two days to the gallery above. Creative editing to make them the right size for the wiki background would be much appreciated. Simon Peter Hughes (talk) 14:03, November 3, 2017 (UTC)

I've been reading through the strips from the very beginning and I noticed that January 20 and 21 are identical.  Was there an error?

Retrieved from "https://peanuts.fandom.com/wiki/Talk:Peanuts_Wiki?oldid=165926"
Community content is available under CC-BY-SA unless otherwise noted.