"The Big Bow Wow" is a song from the stage play Snoopy!!! The Musical and the animated TV special of the same name. It is sung by Snoopy when he finds out that he has been promoted to Head Beagle.

Charlie Brown: Who else do you know who's dog has just been promoted to Head Beagle?

Snoopy: In! If you don't mind the Head Beagle would like to be left alone to prepare his acceptance speech.

Charlie Brown: I recognize that kick! That's the kick of someone who would like to be alone to make his acceptance speech.

Charlie Brown: And considers that a reasonable request!

Snoopy: Just think, Head Beagle! I wish I knew where Mom was. Beautiful moments were meant to be shared.

I'm gonna be The Big Bow Wow,
Wait till they see the ol' dog now.
Stealin' the show,
My mom wouldn't know,
Her pup.

I'm gonna be a VIP,
Hey, look at me, a VIP.
Thoroughbred sort, a very important pup.

Three, no! Two, no!
I'm the numero uno!
Are you ready for you know who?

I'm gonna be The Big Bow Wow,
You're gonna see them all kowtow.
Name on my door,
A rug on my floor,
And how?

Class, yes! Style, yes!
Out front by a mile, yes!
Look me up in your dog's who's who,
Gonna be hearin' from Snoopy,
Pardon my beagle, but...WHOOPEE!
Now I'm The Big Bow Wow!

Bigger than Rin Tin Tin and Lassie,
Bigger than Benji, twice as classy.
Let 'em eat steak,
It's time that I take,
My bow! 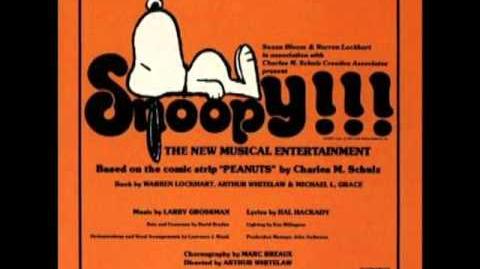 Retrieved from "https://peanuts.fandom.com/wiki/The_Big_Bow_Wow?oldid=189813"
Community content is available under CC-BY-SA unless otherwise noted.