Available on Blu-ray and DVD and via digital streaming.
The Peanuts Movie (Snoopy and Charlie Brown: The Peanuts Movie in the United Kingdom and Australia) is an American 3D CGI animated comedy film based on Peanuts that was released on November 6, 2015, around the sixty-fifth anniversary of the debut of the comic strip and the fiftieth anniversary of the first Peanuts television special, A Charlie Brown Christmas. Written and produced by Charles M. Schulz's son, Craig, his grandson, Bryan, and Cornelius Uliano, it was animated by 20th Century Fox's Blue Sky Studios, and directed by Steve Martino, the director of Horton Hears a Who! and Ice Age: Continental Drift.

The teaser trailer for the movie was released on March 18, 2014, along with the official website and logo for the movie.[1]

The full trailer was released online on November 18, 2014[2] and the trailer hit theatres on Thanksgiving Day 2014.

The Peanuts Movie was rated G by the Motion Picture Association of America and U by the British Board of Film Classification.

Due to the film's critical and commercial success, Fox has been reportedly interested in making a sequel and turning The Peanuts Movie into a franchise.

Charlie Brown is now fed up with the fact that his life keeps going wrong. He soon gets his chance when the Little Red-Haired Girl moves into the neighborhood that winter. After an incident with her moving boxes, he decides to go see Lucy, who helps him become more confident in himself. Charlie Brown decides to see Snoopy for help with his school magic act, in hopes of impressing the Little Red-Haired Girl. Unfortunately, Sally needs help when her act goes wrong during the talent show (She is pretending to be a cowboy.) and she gets ridiculed, and Charlie Brown decides to use all of his time to help her and she wins first prize at the talent show. Later, Snoopy teaches him to dance, so he can go to the school dance and impress the Little Red-Haired Girl. Things begin to bright up; he dances well, and he is complemented. However, he soon goes off the rails and accidentally sets off the school sprinkler system, ending the dance early.

Charlie Brown's future is soon turning, as he is assigned partners with the Little Red-Haired Girl on a book report. Upon hearing she will be gone for a few days to visit her sick grandmother, Charlie Brown decides to do the report by himself. Ignoring Marcie's advice, he writes his report on "War and Peace". It is during this time that he finds he got a perfect score on the test earlier in the film. He gets the report done in time for his award ceremony, but upon his horror, the test is Peppermint Patty's, as the two accidentally mixed up their papers and wrote their names on the wrong submissions. Dejected, Charlie Brown admits his failure and that Peppermint Patty is the real genius (she actually just got lucky), much to the kids' dismay. His mood worsens when the report is destroyed and he is forced to admit this to the Little Red-Haired Girl.

In a side story, after finding a typewriter in the school dumpster, Snoopy decides to write a novel about the World War I Flying Ace. Here, he is trying to save Fifi from the Red Baron with Woodstock and his friends' help, using the key events and situations surrounding Charlie Brown throughout the film as inspiration to develop his story. He ends up acting out his adventure physically, pulling himself across a line of lights and imagining it as a rope across a broken bridge, and he comes across Charlie Brown and the gang several times along the way. Snoopy defeats the Red Baron and rescues Fifi from a destroyed zeppelin. When Lucy finishes reading, she calls it the dumbest story she has ever read, so Snoopy throws the typewriter at her in retaliation and kisses her nose, causing her to run away in disgust yelling that she has "dog germs".

The first post scene that appears during the credits is Lucy and Charlie Brown performing the football gag. In the second scene that appears during the credits, Snoopy, Fifi, Woodstock, the Beagle Scouts, and Snoopy's siblings celebrate Snoopy's victory over the Red Baron with root beer, that is until the Red Baron shows up again and knocks Snoopy into the root beer causing him to shout "Curse you, Red Baron!" (via thought bubble). After the credits are over, Linus' model tri-plane, the runaway flying of which is a running gag throughout the film, finally sputters to a stop over the pond and falls straight in.

5, Cormac, Little Pigtailed Girl and José Peterson are seen but are silent.

Charlie Brown and Snoopy are sleeping at night

Snoopy and Fifi are friends

Flying Ace Snoopy
Add a photo to this gallery

Differences from the strip and TV specials

Blu-ray and DVD versions of the film were released on March 8, 2016. The film was also made available for digital streaming. 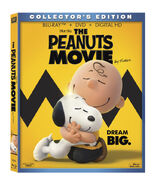 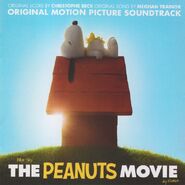 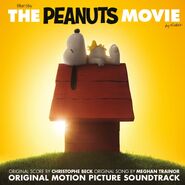 The Peanuts Movie Soundtrack
Add a photo to this gallery

A video game based on the film, The Peanuts Movie: Snoopy's Grand Adventure, was announced on July 8, 2015 and was released on November 3, 2015, just three days before the movie was released. 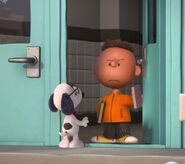 When Snoopy tries to enter the school, Franklin tells him that dogs are not allowed. A clear reference to the movie Snoopy, Come Home.

Snoopy getting his finger caught in a binder is a reference to a specific scene from You're Not Elected, Charlie Brown.

If we look closely in the gym where the winter dance is celebrated, we can see Christmas decorations referencing the tree lot from A Charlie Brown Christmas. 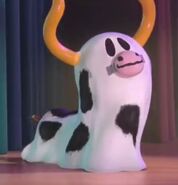 Believe it or not, Charlie Brown's Halloween costume from It's the Great Pumpkin, Charlie Brown was a great model for the animators to create this cow costume

When the sprinkler system goes on if you look closely at the falling water you will discover that it is exactly the same as the way that Schulz drew rain.

Peppermint Patty's famous phrase is said in the movie: 'the funny looking kid with the big nose'

We can actually read Charlie Brown's book report on War and Peace in one specific frame when it blows away. 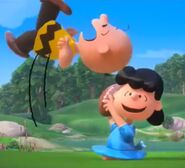 According to the director Steve Martino, they were not planning to do a football gag in the movie, but fortunately they found a perfect place for it that fitted perfectly in the end credits.

This particular scene is referencing the great artist Tom Everheart, who is the only one authorized to draw Peanuts. His artistic style is perfectly reflected here.

Snoopy's obsession with cookies is referenced in one scene when Charlie Brown tells him that he has left him some cookies in his supper dish.

The stage from the school's talent shows is very similar to the one shown in A Charlie Brown Christmas, as it is the backstage.

Reference to Happy New Year, Charlie Brown when Charlie Brown says that he worked all night on the book report and that he could not remember a single word.

A model of a plane is shown in Charlie Brown's room. This plane is actually from one of Schulz's sons, Craig Schulz, the script writer of the movie who is a great fan of flight.

Snoopy's family makes a cameo in the end credits. They are from left to right: Marbles, Olaf, Snoopy, Fifi, Spike, Belle and Andy

The Peanuts characters dance numerous times throughout the movie using the same dance moves from A Charlie Brown Christmas.

If we look closely, we can read the school newspaper. Sally says that she is going to Disneyland.

Franklin's bathroom is very similar from a bathroom shown in a strip.

When Snoopy is shot down by the Red Baron, he makes the same salute as he does in It's the Great Pumpkin, Charlie Brown.

This levitation gag is borrowed from the TV special It's Magic, Charlie Brown.

The magic box gag is very similar to the one from It's Magic, Charlie Brown.

The Peanuts gang in a chorus sing the classic song "Christmas Time Is Here" from A Charlie Brown Christmas. 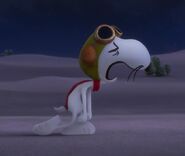 Spike makes a brief cameo in the movie.

If we look closely at one particular frame, we can see the Red Baron.

The classic gag in which Charlie Brown's clothes are knocked off him while he is on the pitcher's mound appears in the movie.

The classic gag of Snoopy getting covered with snow while he sleeps is used in the beginning of the movie.

The gag where Snoopy drags Linus' security blanket across the skating pond in order to steal it is borrowed from A Charlie Brown Christmas.

Schulz loved zambonis. They are referred to in several comic strips.

When Snoopy is skating hand in hand with all the Peanuts gang it is referencing the timeless scene from A Charlie Brown Christmas.

A lesser known gag in the comic strip has the characters interact or play with tiny snowmen. The gag is used in the movie as a treat for fans.

The tetherball shown in the school playground is the same as the one which is shown in You're in Love, Charlie Brown.

A close examination of the pictures on Charlie Brown's class' wall reveals that there are lots of references to Peanuts' recurring themes, such as Lucy's psychiatry booth, the pumpkin patch, even Frieda's cat, Faron.

We can read the newspaper. The article talks about Charlie Brown's popularity and about the Pythagorean Theorem being useful for life.

Lucy's love of nickels is shown, as in A Charlie Brown Christmas.

When Charlie Brown goes trough the carnival, there are some "Bunny Wunny" and Faron plushes as prizes at the stalls.

The classic gag in which Linus' hair stands on end when the teacher calls on him appears in the movie. Schulz loved drawing Linus' "scary" hair.

The sculpture that Charlie Brown makes is a reference made by animators about how complex Charlie Brown's hair is to animate.

Snoopy's novel begins with the timeless phrase, "It was a dark and stormy night."

When Snoopy howls in sadness it is referencing the famous scene from It's the Great Pumpkin, Charlie Brown.

When Charlie Brown is writing the report about War and Peace one of the papers reads "Napoleon was the leader of his army, like a manager of a baseball team."

Blue Sky did not make up the fact that the Little Red-Haired Girl likes to dance. Linus says in the 1986 special Happy New Year, Charlie Brown!, "Wow! Your friend is sure a good dancer."

The War and Peace storyline from the movie is very similar to the one from Happy New Year, Charlie Brown!. War and Peace was Charles M. Schulz's favorite book.

Peppermint Patty's famous phrase, "You're holding my hand, Chuck, You, sly dog", is said in the movie.

A Spark Plug comic book appears. In childhood, Charles M. Schulz gained the lifelong nickname Sparky after the character of the horse Spark Plug from the Barney Google comic strip.

When Charlie Brown blushes, it is really similar to the way Linus blushes in It's the Great Pumpkin, Charlie Brown, with that hand-drawn-with-pencil feel.
Add a photo to this gallery 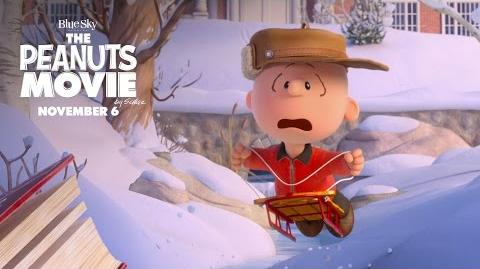 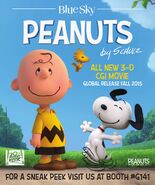 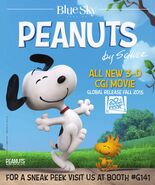 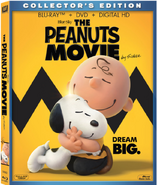 The Little Red-Haired Girl meets Charlie Brown by the bus 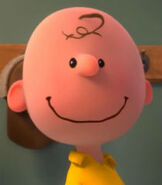 Charlie Brown from The Peanuts Movie

Although The Peanuts Movie has been described as a success and Fox was reportedly interested in making a sequel and turning The Peanuts Movie into a franchise, Fox only had the rights to make one Peanuts film. Schulz's widow, Jean, has indicated that a sequel is not imminent, stating, "This one took eight years, so maybe we'll talk again then."[3]

Retrieved from "https://peanuts.fandom.com/wiki/The_Peanuts_Movie?oldid=194769"
Community content is available under CC-BY-SA unless otherwise noted.