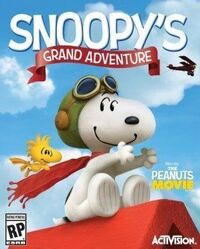 The Peanuts Movie: Snoopy's Grand Adventure is a video game published by Activision and developed by Behaviour Interactive, and is based on The Peanuts Movie as well as the Peanuts comic strips, though the game has no relationship with the movie itself.

The game follows Snoopy, as he goes around the globe to find Charlie Brown and his friends in a game of hide-and-seek, with the help of Woodstock.

Snoopy must also collect jelly beans, avoid many creatures, and find many beagle scouts along the way, and his uniforms can be useful to climb walls, use other passages, etc.

Note that the enemies will be replaced upon their defeat in this game.

Retrieved from "https://peanuts.fandom.com/wiki/The_Peanuts_Movie:_Snoopy%27s_Grand_Adventure?oldid=188806"
Community content is available under CC-BY-SA unless otherwise noted.