View source
watch 01:35
Who is Woodstock?
Do you like this video?
Play Sound

'"Woodstock knows that he is very small and inconsequential indeed. It’s a problem we all have. The universe boggles us…Woodstock is a lighthearted expression of that idea."

Woodstock is a major animal character in the Peanuts comic strip by Charles M. Schulz. He is best known as Snoopy's sidekick and best friend. He is named after the 1969 music festival in New York state. He first appeared in Peanuts on March 4, 1966 but did not have a name until June 22, 1970.

Snoopy started befriending birds in the early 1960s. His bird friends appeared occasionally, and, unlike Woodstock, looked like actual birds. Woodstock made his debut, in March 1966, when one of Snoopy's bird friends made her nest on Snoopy's stomach. After the mother bird left and did not come back, Snoopy decided to care for the birds until they hatched (which proved to be very difficult). When the eggs hatched two baby birds were born. Snoopy soon made them fly away, but one bird, who would later be named as Woodstock, who had a lot of trouble flying, came back. The undertalented bird stayed by Snoopy and his doghouse. At first, Snoopy was annoyed by the winged pest, but eventually warmed to him.

The bird was named Woodstock on June 22, 1970. Since then, Snoopy and Woodstock have been close friends. Snoopy even became friends with Woodstock's friends, who do not look like normal birds either. Woodstock and his bird friends together form Snoopy's Beagle Scouts.

Woodstock joins in many of Snoopy's fantasy games. The pair sometimes argue but they always hug and make up and their disagreements are quickly forgiven and forgotten.

Woodstock never speaks normal words.The only non-avian character who can understand Woodstock's speech is Snoopy. When depicted in the comic strip, his speech is rendered almost entirely in "chicken scratch" marks, with Snoopy either directly translating or allowing the reader to deduce Woodstock's meaning in the context of Snoopy's replies. Woodstock does make non-verbal noises such as yawns,[1] laughter, sighs[2] and "Z"s or snores to indicate sleep. He also uses punctuation marks like "!" or "??" to indicate emotions. In the movies and television specials, the chicken scratches are rendered audibly as a staccato series of high-pitched honks and squawks by Snoopy's voice actor, Bill Melendez.

Despite being a bird, Woodstock is a very poor flyer. It may be because of his small wings, or it may be because, due to his mother abandoning him, Snoopy had to teach him to fly. He flitters around in erratic fashion, often upside down, and frequently crashes into things. In one storyline, Woodstock actually walked South for the winter, with help from Snoopy. He usually manages to get where he wants to go, though, as long as he does not have to fly too high.

It is interesting to note that prior to Woodstock being named a "Bird Hippie" (whom Woodstock resembles greatly, minus the long hair and peace necklace) appeared in the strip from November 1, 1967.[3] Considering that Woodstock is named after the eponymous music festival, which is normally associated with the hippie culture, one must wonder whether there is some sort of connection between these two characters.

Snoopy has often wondered what type of bird Woodstock is. In a series of strips from September and October 1980, Snoopy attempts to identify him using his Guide to Birds. The birds which Snoopy suggests and Woodstock attempts to imitate are: crow, American bittern, Caroline wren, rufous-sided towhee, yellow-billed cuckoo, Canada goose, warbler, and a mourning warbler. Snoopy finally gives up trying to figure it out in the strip from October 11, 1980, and hurts Woodstock's feelings by saying, "For all I know, you're a duck". Snoopy takes it back with a quick hug, at which point it becomes clear that it does not matter what type of bird Woodstock is; the only important fact is that he is Snoopy's best friend.

Woodstock is sometimes assumed by Peanuts readers to be a canary due to his resemblance to Tweety Bird but has never been named as such in the strip.

Some readers consider that because Woodstock was named after the music festival, which had a dove as its icon, Woodstock must therefore be a dove.

Schulz never definitively answered the question of what type of bird Woodstock was supposed to be.

Woodstock is the only Peanuts character whose gender may have changed. Schulz claims he originally considered the bird to be a female but changed his mind after naming it in June 1970. In an interview in 1987 Schulz said; "I had been reading the Life magazine article about the Woodstock festival and I had the little bird in the strip. It was a she and she was Snoopy's secretary and I was doing secretary jokes quite often so then I thought Woodstock would be a good name for this bird and also, it will get the attention of these people that liked that kind of thing. Suddenly she was not a secretary; she became Woodstock, the boy. It just happened. But that's what's good about a comic strip - you can just do it."[4]

In the Norwegian translation of Peanuts the bird is named Fredrikke - a female name - and it is always referred to as a female.

King Woodstock from the end credits of Snoopy the Musical

Woodstock on his lounge chair, listening to music with his quadraphonic stereo system 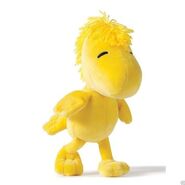 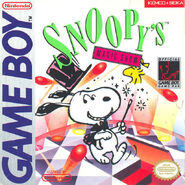 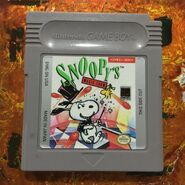 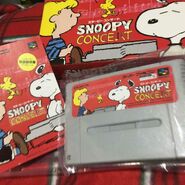 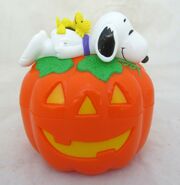 Woodstock is on top of Snoopy's tummy 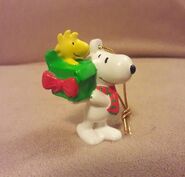 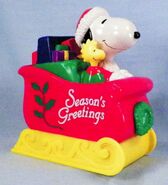 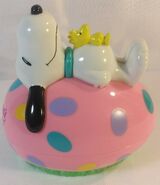 Woodstock can be seen in the Snoopy Spot the Difference app

Woodstock in The Peanuts Movie

Woodstock first appears, together with his unnamed sibling, in the strip from March 4, 1966.