You're a Good Sport, Charlie Brown

Be My Valentine, Charlie Brown

You're a Good Sport, Charlie Brown is the fourteenth prime-time animated TV special based on the comic strip Peanuts by Charles M. Schulz. It was originally aired on the CBS network on October 28, 1975. It has been released to DVD by Warner Home Video.

The special begins with Snoopy on a tennis court testing an automated ball server, which soon malfunctions and pelts him repeatedly with tennis balls. Then, Linus and Sally are seen going to a tennis court to play tennis, but when they arrive they find the court is crowded. Sally loses her temper and warns the other players to leave the court, or else her "boyfriend" will beat them up. Upon hearing that, Linus panics and runs away, either to spite Sally for calling him her boyfriend, or more likely in fear of being beat up himself. Sally then sits alone on a bench discouraged.

Snoopy arrives, and plays against an unseen player. After executing rather unorthodox tactics, Snoopy gains the lead. However, as a result of a few mistakes, he blows his lead of 6-5 and throws a tantrum in response. A one-point sudden-death tie-breaker is held, but Snoopy misses a pass, losing the match. Snoopy responds by breaking his racket in two. The winning player he played against is revealed to be Woodstock.

After Snoopy and Woodstock's game, Peppermint Patty arrives on a motor bike and tells Snoopy about the upcoming motocross race for charity; she suggests that Snoopy should get a bike and enter.

Meanwhile, Linus and Charlie Brown are tossing a football around, until Lucy comes and asks him if he wants to try and kick a football she is holding. Charlie Brown becomes so angry that she thinks he will fall for that again. They are then interrupted by Peppermint Patty on her motor bike, who tells them about the motocross race, and states that the winner of the motocross will win two tickets to the Pro Bowl. She tells them she will be entering the race, and they should enter, then rides off. Linus thinks the race is a good idea, and volunteers as the pit crew, with Charlie Brown as the racer. Charlie Brown agrees, but only if he and Linus combine their money and buy a bike together. Lucy then tells Charlie Brown that he should kick the football for practice, and she, of course, pulls it away making him fall.

At the bike shop, they purchase a poor-quality bike because that is all they can afford. When Charlie Brown asks if it runs, Linus replies that "even if it walks, we'll be running ahead".

Charlie Brown and Linus then get ready for the race. Peppermint Patty wishes them luck, but says she will still beat them. While they are getting ready to start the race, Peppermint Patty notices a contestant named the "Masked Marvel" (Snoopy) and says he will be no problem for her.

The race commences, with Snoopy taking an early lead but both he and Charlie Brown abruptly wipe out on the first turn. An ambulance picks them up, but while rushing to the hospitals it accidentally switches the two around, and Charlie Brown is taken to a vet kennel while Snoopy is admitted into the hospital. After snapping out of his daze, Charlie Brown realizes he is in the wrong place, and must return to the race. He escapes from the vet, and then pulls Snoopy from the hospital. They make their way back to the motocross.

When they arrive back at the race, Linus hands Charlie Brown a hollowed out pumpkin for a helmet, replacing the one he lost in the accident; with Sally reminding him not to mention the "Great Pumpkin". Charlie Brown and Snoopy then return to racing. Meanwhile, all the other competitors get stuck in the various mud traps, soon only Charlie Brown, Peppermint Patty, and Snoopy remain in the race. However, Peppermint Patty also gets stuck in a mud trap, and then only Charlie Brown and Snoopy remain. Snoopy pulls ahead of Charlie Brown, and it begins to look like he will win the race. However, while Snoopy is showing off, his bike suddenly breaks down and he quickly replaces it with the tennis ball server, by removing the cycle's engine and putting it inside.

While Snoopy is riding on his tennis ball server, he throws tennis balls at Charlie Brown to slow him down. Having gained a massive lead, Snoopy stops for a picnic (a reference to the classic story of "The Tortoise and the Hare"). However, Charlie Brown appears and passes Snoopy, he carefully makes his way around all the traps, and his steady speed helps him pass all the terrains. Snoopy again rushes to reach the finish line, but then gets stuck in a mud trap like the other competitors.

Charlie Brown wins the race by default, which makes Lucy think the world is coming to an end. All the kids come to cheer for Charlie Brown as he is about to receive the grand prize. Loretta, the child in charge of the motocross comes over and kisses Charlie Brown, and hands him the prize which turns out to be a gift certificate for five free haircuts. Marcie explains that they could not afford the grand prize of Pro Bowl tickets and the haircut certificate is a substitute. The prize is useless to Charlie Brown, since his father is a barber and he does not have much hair to cut anyway.

At the end of the day, Linus consoles Charlie Brown by telling him that the fact that he won against overwhelming odds is more important than receiving a prize.

The next day, a confident Charlie Brown is ready to pitch another baseball game, saying to the team that in spite of his "980 straight defeats", he is certain that he will win this game. However, as the viewers would expect, Charlie Brown's first pitch is hit right back to him, knocking him out of his clothes. 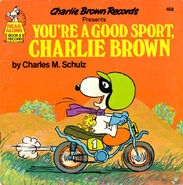 DVD cover of 2 pack with You're Not Elected, Charlie Brown