You're in Love, Charlie Brown

It's the Great Pumpkin, Charlie Brown

This special was nominated for the Emmy Award for Outstanding Achievement in Children's Programming (as was He's Your Dog, Charlie Brown), and garnered separate nominations for Special Classification of Individual Achievements for both Charles Schulz and Bill Melendez. It therefore received 3 Emmy Award nominations, the most of any Peanuts special.

It is late spring, school is about to let out for summer vacation, and Charlie Brown is upset about everything, and very stressed. On the way to school, he meets Linus and tells him he is frustrated that he cannot enjoy himself like all the other children at school. When he notices the Little Red-Haired Girl, sitting on a passing bus, he gets very excited, and wonders why he can never eat lunch with her. Linus exclaims, "I know what the problem is. You're in love, Charlie Brown."

During the second-to-last day of school, Charlie Brown agonizes over the Little Red-Haired Girl, trying to think of different ways to get her attention, only to have each attempt fail embarrassingly. First he writes her a love note, but he gets called on by the teacher to read a report in front of the class, and accidentally reads the note aloud to the raucous laughter of the class. Then he goes to the pencil sharpener, which is right behind the Little Red-Haired Girl's desk, but accidentally sharpens his ball-point pen. Lunch hour is just as frustrating. He tries to get up the courage to go and talk to the girl, only to fail at the last moment. Then he panics when the Little Red-Haired Girl approaches him; he ties his peanut butter sandwich in a knot and pulls his lunch sack down over his face. When lunch is over, Charlie Brown accidentally bumps into Lucy and removes the bag from his face. Charlie Brown is mad at himself for what happened. He tells Lucy that pretty faces make him nervous, to which Lucy replies, "How come my face doesn't make you nervous?" On the way home, Lucy and Violet tease Charlie Brown for the ridiculous book report he gave in class and they both start laughing at him. Linus defends him by telling them he is madly in love with the Little Red-Haired Girl, but this only provides the girls another way to humiliate Charlie Brown.

That afternoon, Charlie Brown meets Peppermint Patty and talks about the girl at school, but before he can mention her red hair, Peppermint Patty jumps in and tells "Chuck" that she knows exactly who he is talking about, and will set up a meeting with her. She then tells Lucy that "someone" wants to meet her at the ball park that night. Lucy agrees, thinking the "someone" is Schroeder, and Peppermint Patty returns to tell Charlie Brown everything is all set. When the two meet each other at home plate, they respond with "You! Bleah!"

The next morning, the last day of school before summer vacation, Charlie Brown plans to get up early in the morning, so he can take the bus (he normally walks to school) and meet the Little Red-Haired Girl at the bus stop. He actually sets his alarm for 4:30 in the morning, but is so tired, he falls asleep on the bench at the bus stop, and when the bus comes, it leaves him behind. He arrives late for school and is sent to the principal's office. When he comes back to class, the teacher calls on him to solve a math problem on the blackboard. Thinking he will finally impress the Little Red-Haired Girl, he struts to the blackboard and works hard, but when the teacher asks him if he knows what he is doing, he admits he does not have a clue. He is once again laughed at, and once again goes slowly back to his desk.

When school is finally over, Charlie Brown realizes he can go on the bus, and finally meet the Little Red-Haired Girl. Charlie Brown beats everyone out to the school bus to meet her but a clamoring crowd of fellow students pushes him away. The last student gets on the bus, and it pulls away again, leaving Charlie Brown behind. He shouts out that he missed his last chance to meet the Little Red Haired Girl, until he notices a sheet of paper that had gotten slipped into his hand. It reads:

I Like You, Charlie Brown. signed Little Red Haired Girl

Charlie Brown's anguish quickly turns into delight and hope as he dances up the hill toward home as the end credits roll. At the very end, he stops and asks himself, "Good grief! How will I live until September?"

Patty, Schroeder, Shermy, Frieda, "Pig-Pen", and 3 and 4 also appear in this special, but they are silent. 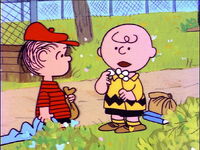 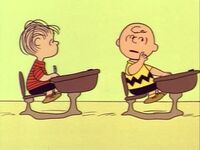 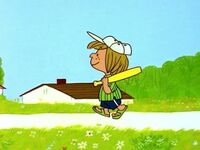 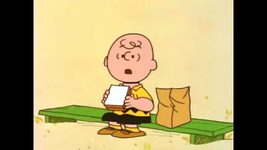 "Those kids look like they're having a lot of fun." 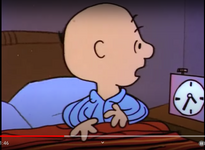 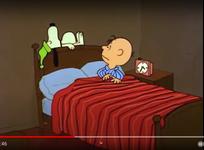 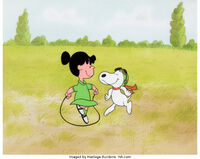 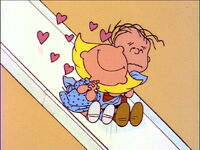 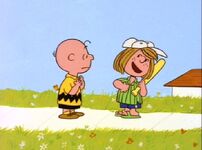