You're in the Super Bowl, Charlie Brown

You're in The Super Bowl, Charlie Brown VHS. Videotapes were distributed by Shell gas stations

You're in the Super Bowl, Charlie Brown is the thirty-seventh prime-time animated TV special based upon the popular comic strip Peanuts, by Charles M. Schulz. It first aired on NBC on January 18, 1994.

This special begins with Snoopy, as the World Famous Coach, getting his football team, The Birds, ready. It consists entirely of Woodstock and his tiny friends. The announcer says, this game will decide the Eastern Division Champs for the "AFL" (Animal Football League). They are playing the team "The Cats" a ferocious group of cats. The Birds crush The Cats, 38-0, making them the Eastern Division champs. The Birds will be moving on to the East-West Conference Championship, but not before pouring a victory bath of "Chirpade" on the coach.

Lucy is seen asking Charlie Brown to kick a football. Charlie Brown refuses to do it. Lucy then asks him "Are you gonna go through life not trusting anyone? That's no way to live." Charlie Brown decides, she is right and tries to kick the ball, until Peppermint Patty comes, with Marcie, Franklin, and Linus. She tells Charlie Brown and Lucy there will be a football punt, pass and kick contest and first prize wins a new bicycle and a trip to the Super Bowl. She suggests that they should all enter. While Lucy is looking at the poster for the event, Charlie Brown realizes now is his chance to kick the football. He runs up to kick it but Lucy pulls it away.

While Charlie Brown and Linus are practicing for the contest they notice a very pretty girl, and she catches Linus's attention. They both walk over to her and introduce themselves to her. The girl says her name is Melody-Melody and she has been watching them. They flirt with her, and take her out for hot fudge sundaes. They then try to impress her and try to tell how they will be entering the punt-and-kick contest. Melody says she will be rooting for them at the contest.

A quick time-out for more Animal Football Action occurs as The Birds are seen playing against The Dogs in the East-West Conference Championship. Once again, The Birds crush the other team, this time 58-0. It is then onto the World Championship, but not until another bath of Chirpade is poured onto the coach.

At the punt-and-kick contest. Charlie Brown and Linus see Melody watching them, and they argue over which one of them Melody came to watch.

The announcer announces every player, and each player gets a better score than the previous one, except for Marcie who does not want to kick the football (because the football did not do anything to deserve being kicked).

Charlie Brown's turn comes. He scores more points then anyone so far and Peppermint Patty, says, "That probably wins it for Chuck." However, Linus' turn comes and he beats Charlie Brown's score. Linus gets excited because he thinks he won. The announcer then announces the last contestant, Miss Melody-Melody. This gets Charlie Brown and Linus confused. They thought Melody came to watch them play, and not enter the contest.

Melody goes, and beats Linus' score. Linus gets very upset. He admits to Charlie Brown that he was in love with her. Melody wins the new bicycle and the tickets to the Super Bowl, leaving Charlie Brown and Linus in shock.

The special ends with Charlie Brown and Linus at the wall. Linus says he is so upset that the girl of his dreams beat him in the contest. He says he will not trust anyone ever again. Charlie Brown tells him, "Your sister says we can't go through life doubting everyone. We have to learn to trust each other." Lucy then comes to them holding a football, to which Charlie Brown says, "I can't stand it."

The Bison are the team The Birds are up against during the finals of the AFL (Animal Football League) world championships in the TV special. Unlike The Cats and The Dogs teams, this team are tougher opponents for the Birds. However, even though they are a tough team, they still lose to The Birds 62–0.

They are the only bison to ever appear in a Peanuts cartoon.

Unlike the other AFL teams featured in the special, their size, relative to the birds, is not realistic for the animals they represent 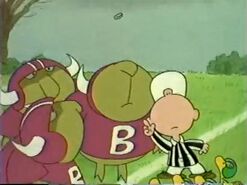 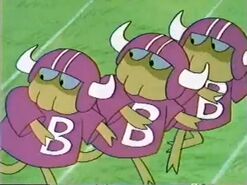 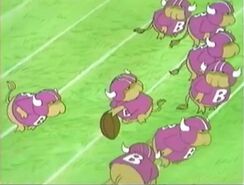 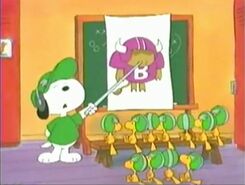 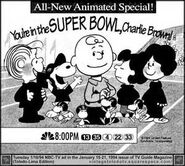